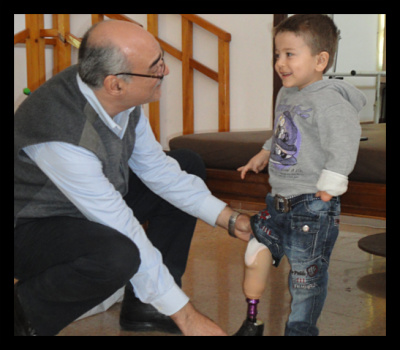 Fifteen percent of the world’s population has some form of disability, leaving approximately 110 million adults with significant difficulties in functioning. Founded in 1955 by Howard Rusk, the World Rehabilitation Fund (WRF) believes that all people, regardless of disabilities, have the right to be part of their communities and to have full access to opportunities like education and employment.

To make good on its belief, WRF has become involved in humanitarian services in the Middle East. The nonprofit is dedicated to provide artificial limb technology to disabled people in Afghanistan, one of the most heavily-mined places in the world. WRF aims to provide fitted limbs to 2,000 amputees. WRF piloted prosthetics limbs in response to devastating natural disasters such as the earthquake that crippled thousands of Pakistanis in 2006. The artificial limbs have proved to be suitable and comfortable for below the knee amputees.

WRF also supports the disabilities by financially supporting the Artisans Association of Cambodia. The AAC sells artisan products made by Cambodians with disabilities and helps them to make a living wage. The sales revenue of the AAC rose from $250,000 in 1999 to over $3,000,000 in 2012, benefiting 2,000 artisans. The AAC exports its products to over 9 countries in Asia, Europe, North America and New Zealand.

Today, the WRF is responding to the civil war in Syria, assisting millions of refugees being forced to flee to neighboring countries such as Lebanon. WRF-Lebanon provides life-changing devices to people with disabilities ranging from hearing aids to artificial limbs. Over 600 people have been helped by WRF and its partners in that war-torn area.

WRF’s sustained efforts to make a difference in the lives of the disabled people across the globe is a testament to their belief that each person’s dignity is interconnected. As Rusk, says, “To believe in rehabilitation is to believe in humanity.”