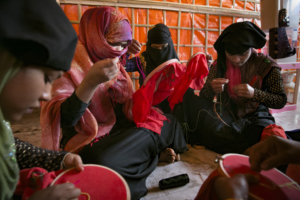 Low-income areas with a high population density are at the highest risk of contracting the coronavirus. This threat is very prevalent in the Rohingya refugee camps, especially for women and girls.

Currently in Bangladesh, there are over 860,000 Rohingya refugees living in camps. The Rohingya people, a minority ethnic group from Myanmar, are fleeing from genocidal violence, persecution, discrimination and human rights violations. The Rohingya face violence because they mainly practice Islam while the majority of Myanmar is Buddhist. The large mass of people fleeing into Bangladesh has caused the refugee camps to become immensely populated. The result is overcrowding, only temporary shelter, communal bathrooms and water facilities and limited food space.

Overcrowding and limited space in refugee camps result in the Rohingya having an especially high risk of contracting COVID-19. Currently, the best way to prevent the spread of this disease is to social distance, wear masks and increase testing. However, the Rohingya refugees do not have the space or resources to do this. As of June 2020, there were four deaths and 45 confirmed cases within the Rohingya refugee population. However, because there is a huge lack of testing, these numbers are most likely not accurate. The hospitals in city centers no longer have resources themselves to treat any more people. As such, many infected Rohingya aren’t being accepted.

How Women are Fighting Back

Oxfam, an NGO fighting poverty, traveled to the Rohingya refugee camps to help build better water, sanitation and hygiene stations. This includes systems like water taps and hand washing stations, which could be potential risk areas for disease spreading. When designing the new water and sanitation facilities, Oxfam interviewed many girls and women to hear their thoughts. The women and girls contributed to design aspects like how the stations should stand, where hooks should go, and even suggested a mirror. All of the expertise given by those Rohingya women and girls has spread to other camps. Now 300 hand-washing and water stations are implemented in three different refugee camps.

Women also have taken on the important role of spreading information and discounting myths surrounding COVID-19 in the refugee camps. One woman, Ashmida Begum, walks around the camp dispelling myths. Begum explained that she uses the Quran to help explain the virus and disease prevention. She mainly helps other women and children who are a large majority of Rohingya refugee camps. Misinformation has led Bangladesh to lift internet restrictions on the Rohingya refugees. The barriers were originally in place to quell panic and stop rumors. Instead, rumors and myths spread and local women like Begum worked to stop them.

Women have been so effective in helping the refugee camps because the local people trust them. They have special access in reaching other women, who normally do not leave their homes often and do not have internet.

Women are traditionally the primary caregiver of the family, so they especially need to be healthy and informed to keep the rest of the family safe. This is also why women’s input is needed in the sanitation and water stations; women will be using them the most.

Impacts of this Work

The work that the women and girls of Rohingya refugee camps have impacts beyond fighting COVID-19. Oxfam reports that the design process helped girls take a more active role in their own lives. They were able to think and speak for themselves.

The rise in panic and social tensions in the camps resulted in a rise in domestic violence and violence against women. Rohingya women stepped into leadership roles and formed networks to help combat that panic around the virus to counter the gender-based attacks.

The work done by the women in Rohingya refugee camps to fight COVID-19 is helping to increase cleanliness and knowledge about the virus. They are slowing the spread of the virus and giving women and girls a way to be leaders in their communities.