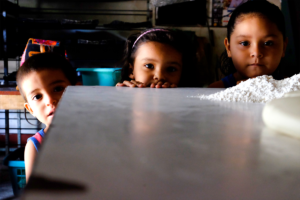 Every year, an estimated 500,000 people flee to Mexico to escape the NTCA. As involuntary witnesses to intense violence and economic instability, hundreds of thousands of citizens of El Salvador, Honduras and Guatemala choose to make the perilous journey north in hopes of finding safer, more peaceful living conditions. Immigration through the U.S.-Mexico border is not a recent or new development. Migration levels are increasing rapidly each year. Many asylum seekers are women and children searching for a life without senseless violence.

The three countries of the NTCA are extremely dangerous, and all rank within the top 10 for homicide rates and dangerous gang activity. In 2015, El Salvador became the world’s most violent country, rampant with gang-related violence and extortion. Though El Salvador no longer holds this title, high levels of poverty and violence continue to cause a rise in people fleeing Central America.

The NTCA includes three countries that are among the poorest in the western hemisphere. Though Latin America has seen improvement in the distribution of wealth among its citizens, many still face the devastating effects of economic inequality that plagues the region. In 2014, 10 percent of citizens in Latin America held 71 percent of the region’s wealth. As a result, one in four people live in poverty, concentrated in rural areas. The most oppressed of this population tend to be women and indigenous peoples.

Economic migration has long been a factor surrounding discussions on immigration. People often choose to live and work in places with more prosperous economic opportunity. In rural areas of the NTCA, the need for more economic opportunity leads to people fleeing Central America. Sixty percent of people living in rural regions of the NTCA is impoverished.

Violence within the NTCA remains a leading cause of migration to the Mexican border. Because of the high poverty level across this region, governments do not have enough funds and are rampant with corruption. Many flee from senseless, violent crimes, including gang activity, kidnapping and brutal homicides, which law enforcement does not always punish.

Gang activity within the NTCA also causes citizens to flee. Women and children are at the highest risk for rape and kidnappings. People commit gender-based violence in El Salvador, Honduras and Guatemala to coerce or intimidate others. Many children make the trek to Mexico alone because they are desperate for asylum to avoid gang recruitment.

Providing Aid to the NTCA

As witnesses to the traumatic violence raging throughout the NTCA, many people fleeing Central America are in dire need of medical and mental attention. Since 2013, Doctors Without Borders has provided more than 33,000 health consultations to those fleeing from the NTCA. Care includes treatment for victims of sexual abuse and diseases caught along the way.

Additionally, Doctors Without Borders, the International Crisis Group and the U.N. Refugee Agency have made strides urging host countries, like the U.S., to provide protection rather than detaining asylum seekers and sending them back. This strategy would reduce illegal entry and allow host countries to manage the influx of asylum seekers.