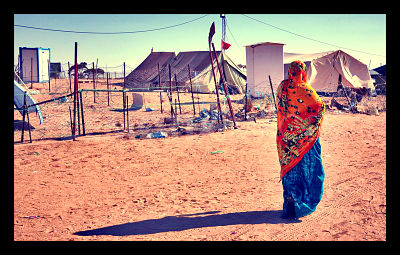 Abdel is a refugee in Choucha Refugee Camp, Tunisia. He arrived there in 2011 after years as an orphan in Libya. Originally from Cote D’Ivoire, Abdel’s parents had to flee that country for unspecified reasons, and his mother died before he turned five years old.

During the Libyan uprising against Muammar Gaddafi in February 2011, Abdel was held captive for ten months, during which time he and his father were forced to watch his sister’s rape and murder. After the ten months, he was freed and fled to Choucha in the city of Misrata, which at its peak held tens of thousands of Libyan refugees (most of which have been relocated to other countries).

Abdel soon decided that he could not tolerate sitting around in the camp all day, being bored and lonesome. That drive inspired him to apply for a pilot skills training program organized by the UN Refugee Agency (UNHCR) and the Danish Refugee Council, located about 87 miles from Choucha.

Abdel’s enrollment not only gave him something to do other than sit in Choucha, it also gave him a bit of hope for the future. In an interview, he admitted that for the first time in years he is sleeping well and that he’s looking at opportunities to continue his studies beyond Choucha.

In his class, Abdel is learning to make jewelry. The refugees eat and sleep in dormitories during the program, and the close quarters allow them to form friendships that help with feeling lonely or helpless. The program consists mostly of young males, but as the classes have begun to soar in popularity, young women have started to apply as well.

Abdel isn’t the only success story of the pilot programs. Danish Refugee Council project officer Gianmaria Pinto expressed in an interview that at the last session before the end of year break, all of the refugees were excited about that prospect of learning and did not want to return to Choucha.

Choucha is scheduled to close at the end of June 2013. Spokesperson for UNHCR Ursula Aboubacar insisted during a press conference in Tunis that the closing of Choucha will give the 900+ refugees still living there a better life. Though many of the refugees have nowhere to go and are still waiting to be relocated, the closing of Choucha will force them to make arrangements to support themselves.

Choucha housed many North African refugees in a time of violent tumult, and in the cases of young men and women like Abdel, has even given them skills and resources that they can use to generate some sort of revenue or self-worth. UNHCR and the Danish Refugee Council have put together a program that will help refugees and Tunisians alike get on their feet and build futures for themselves that, if all goes well, don’t reflect their pasts.