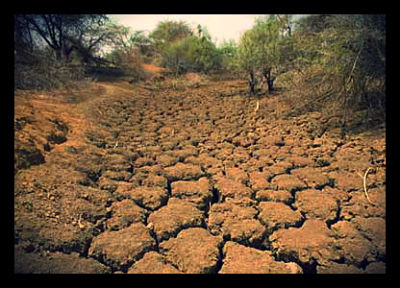 Famine and drought are often considered one and the same. It is easy to think that where there is drought, there is certainly famine or that where there is famine, there must be drought. The truth of the matter is that the difference between a famine and a drought is huge. Famines and droughts are caused by various conditions and factors that sometimes have nothing to do with the other.

Drought may be defined in three ways. That is to say, there are three kinds of drought. Meteorological drought is a reduction in rainfall below a certain level that is scientifically considered to be a drought. This kind of drought may occur in the course of a season, month, or even day. If it rains less than a specific amount, over the specified amount of time, you have meteorological drought.

Agricultural drought occurs when there is a significant reduction in crop yield, such that it may fall to a certain level considered to be a drought. This kind of drought may be caused by meteorological and/or hydrological drought, but may just as easily stem from insufficient access to fertilizer or some other necessary ingredient to produce yield.

Famine, on the other hand, is caused by a decline in availability of and/or access to food often caused by one of the three kinds of drought. Where there is insufficient water to produce a staple crop, for example, or where there is insufficient fertilizer to produce the standard yield for a crop, drought may lead to and certainly cause famine. Yet, it is not necessarily the drought that causes such a famine.

For famine to occur, there must be insufficient availability of or access to food. Though there may be some kind of drought one year, adequate food management of the available crops may effectively prevent famine. This point highlights the importance of access to food. On that note, inadequate management of a drought may lead to famine because families with less purchasing power, say, are unable to gain access to the available foodstuffs.

Though famine often does follow drought, it is not necessarily a cause and effect relationship. Rather the difference between famine and drought lies in the complexity of this relationship and the conditions and factors that surround local circumstances, as well as government and community responses to drought. The difference between famine and drought is therefore dependent on what causes the drought and how communities handle their food supplies.

Scaling Up: The New Face of Development Mobility International USA
Scroll to top