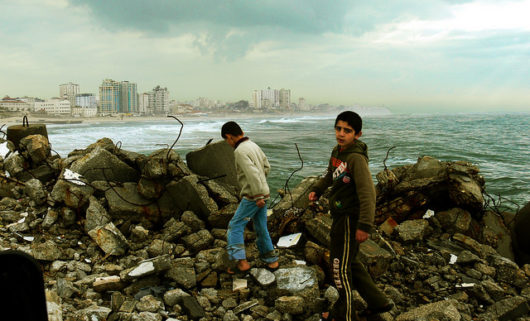 The Gaza Strip is a Palestinian territory, located on the Mediterranean Sea, that borders with Egypt and Israel. However, it is separated from the West Bank, with Israel severely limiting movement of Gazans wishing to transit between the two territories. Additionally, since Hamas, a Palestinian Sunni-Islamist fundamentalist organization, got elected to power in 2007, the help from the Western nations to Gaza has been limited.

This has hampered Gaza’s infrastructure, including a resource vital for all life on Earth, water. Pollution and groundwater depletion are the major concerns, with some sources estimating that 95 percent of groundwater sources are contaminated in the area. Water security in Gaza depends mainly on improving infrastructures, such as sewage treatment and groundwater withdrawal practices.

A Brief History of Gaza

Following the partition of Israel into Jewish and Palestinian territories in 1948, Egypt occupied Gaza. The territory remained under the Egypt control until Israel seized it in the Six Day War of 1967. Israel withdrew in 2005 and only two years later, the Palestinian Authority was ousted in elections in favor of Hamas, considered to be a terrorist organization by most of the world. Israel’s response was a complete blockade of Gaza, limiting the abilities of goods and services to enter the territory.

With the blockade came severe restriction of movement for Gazans, at both the Israeli and Egyptian borders. Beginning with the second Intifada, the Palestinian uprising against Israeli occupation, Israel drastically reduced the number of Palestinian crossings at the Erez border, the only land crossing for the movement of the people, generally limited to humanitarian aid and medical treatment. Statistics outline the decline in crossings. Before the outbreak of the intifada in 2000, an average of 780,000 Palestinians entered Israel through Erez monthly. That number is now around 12,000. Such restrictive border controls have implications for water security in Gaza as well.

Water accessibility and quality in Gaza are quite poor. Compounding to the problem of poor facilities, Gaza’s location in a water-stressed, drought-prone region affects water security in Gaza. Israel handles droughts through innovate methods such as drip irrigation and desalination plants. The Israeli government can afford to finance these projects because they are a highly prosperous nation. However, these methods are a luxury in Gaza.

Gaza’s main source of drinking water for decades, an underground aquifer, is depleted, with rapid population growth outpacing supply. Consequentially, seawater from the Mediterranean is seeping in, making the aquifer largely unusable. Gaza imports desalinated water from Israel, but the tense situation on the border has resulted in an increase of just five million more cubic meters of water in 20 years, a meager amount for a population of over two million people.

The international community has a strategic interest in water security in Gaza. The present, squalid conditions in Gaza create an environment ripe for extremism and resentment towards its more affluent neighbor. Recently, Israel has approved a shipment of building materials to enter Gaza in order to construct a large desalination plant. A notable nonprofit organization called Interpal is providing Gazans with immediate solutions, such as water filtration systems. However, effective water quality reform will require infrastructure reform, as well as coordination with Israel to ensure lasting water supply in the region.

Water security in Gaza affects at least two million people living in the region but should concern the international community as well. Desperate conditions create desperate civilians, and given the history of conflict in the region, solving this problem is paramount. A water-secure Gaza improves Israel’s long term security and improves the security of the Middle East, which has positive implications for everyone.