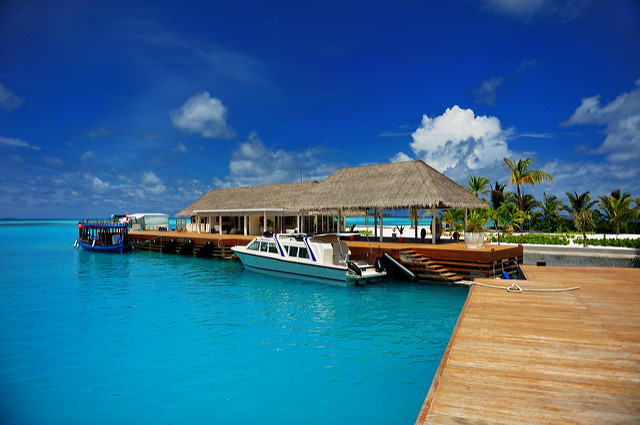 The Maldives—a nation composed of over 1,000 islands and known as a tropical paradise—has a dirty little secret: the world’s largest trash island.

A few miles from the capital city, Malé, an artificial island has been built in order to solve Malé’s trash problem. However, with over 10,000 waste-producing tourists visiting the Maldives each week, the trash island has grown into a pile covering over 124 acres. While tourism has sparked a healthy economy and turned the Maldives into the richest country in South Asia, the industry is consequentially producing an environmental burden with the unsustainable creation of waste. The trash island “grows” nearly one square meter each day. The island—named Thilafushi—is concerning environmental campaigners at an alarming rate.

The waste is brought to the island on ships and taken ashore, then sifted through by hand. While some trash is incinerated, the majority of waste is buried in landfills. As a result, environmentalists are “seeing batteries, asbestos, lead, and other potentially hazardous waste mixed in with the municipal solid wastes being put into the water.” Malé environmentalist, Ali Rilwan, notes, “these wastes are a source of heavy toxic metals and it is an increasingly serious ecological and health problem in the Maldives.”

Some of the reasons Thilafushi is such a big problem are very simple. Firstly, the islands of the Maldives are small, which means so are the freshwater sources. By housing large amounts of waste, water contamination is bound to occur and according to Rilwan, it is occurring. Secondly, because of the small landmass and the large tourism industry, waste is going to be produced and it has to go somewhere. At this point, India is being paid to take some of the waste.

Fortunately, water quality in the Maldives is more of an anticipated problem than it is a present one. According to the U.N. Global Analysis and Assessment of Sanitation and Drinking-Water, access to drinking water is high. While water degradation due to salinity and pollution make the access challenging, the U.N. reports over 90 percent of the Maldives do have access.

In response to the call for improved quality, the nation has set forth a number of specific goals, including keeping rural water supplies functioning long-term, improving continuity of urban water supplies and rehabilitating broken public facilities. The Maldives has embraced financing a WASH program, which recognizes drinking water and sanitation as a human right.

The government is active in making the right to drinking water a reality across the islands. After taking notes from the problems of small freshwater resources and the pollution that is seemingly unavoidable as a result of tourism, the government has joined with Aquaver and Stelco—a power company—to address the problem with a new idea: desalination plants.

To better ensure good water quality in the Maldives, the partnership is seeking to build a desalination plant on every island, in order to provide a safe and reliable drinking source that also has an energy-producing capacity which capitalizes on the heat exchanges that occur during the desalination process. The plan includes distribution kiosks with reusable containers. Overall, this would reduce waste and increase access to high-quality water, which directly aids the Maldives in solving two pending problems.

With the government’s careful monitoring and proactive initiative with local businesses, the future for water in the Maldives is looking good. In the recent past, water quality in the Maldives has been a quiet topic, as it brings hidden secrets—such as Thilafushi—into the conversation. However, by revealing what is damaging the water quality and addressing the issues with innovative solutions that grow business, increase safe water access and remove one less piece of trash from the nation’s waste, the future looks nearly as crystal clear as its famous beach waters.