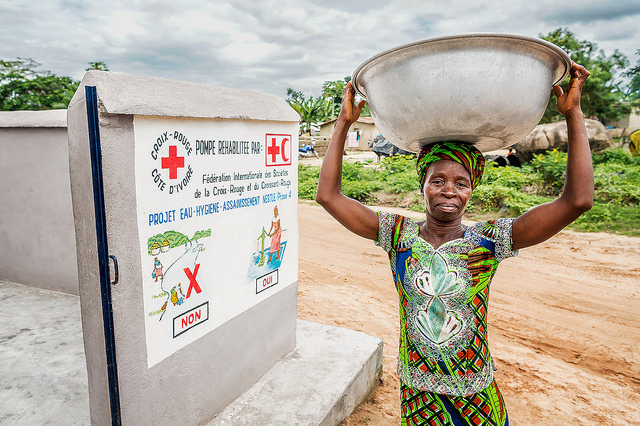 Côte d’Ivoire used to be an exception in West Africa, a model for other countries of economic success. Since civil war erupted in the country more than a decade ago, that model has deteriorated and largely rendered a mere dream. Now, the country is in dire straits, especially in regards to the quality and conditions of its water supply. Water quality in Côte d’Ivoire is an issue for a staggering 31 percent of rural areas.

Furthermore, the quality of water that is available leaves much to be desired. The civil war has tremendously damaged the water supply infrastructures, and this coupled with the fact that water is exposed to unsanitary conditions often results in water-borne disease. This is not confined to rural areas either; it affects urban areas as well.

Slightly less than half of Côte d’Ivoire’s population (about eight million people) do not have access to proper sanitation facilities. In rural areas in particular, roughly four million people drink water not safe for consumption. As a result, many die from diseases related to unsafe and unclean drinking water, including children.

This crisis has a domino effect on other aspects of Ivorian society. The lack of access to proper and clean water sources means that a lot of energy and resources must be devoted to obtaining it. This results in many Ivorian girls being forced to forego their education in order to seek and provide water for their families.

This is true even in the capital, Abidjan, where a large influx of people into the capital has strained its inadequate urban infrastructure. The large swathes of people that have moved to Abidjan did so largely because of the civil war and the threat of violence.

In other cities, such as the northern town Dabakala, the wells that previously contained water have completely dried up. This has resulted in residents seeking unsafe and unclean water sources. When water is obtained from such sources, such as creeks, life-threatening diseases such as guinea worm and cholera easily affect those in need of water.

However, there have been campaigns to combat this problem. Efforts made by the Global Nature Fund, for example, have met the needs of Ivorians by repairing water pumps. Within a couple of years, the residents of 44 villages, or around 24,000 Ivorians, were able to access fresh groundwater.

The water quality in Côte d’Ivoire and a lack of it is causing severe crises. These calamities were a result of the outbreak of civil war that has successfully dashed the stability, safety and prosperity of the nation. While some improvement efforts have been made, this crisis will only continue unless serious changes are enacted on an international scale that provide a long-term solution to the water needs of Côte d’Ivoire.