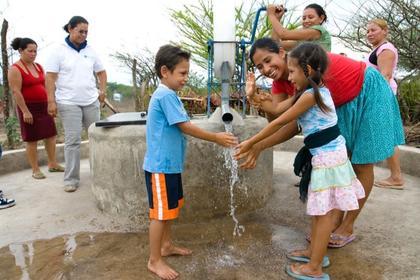 The Nicaraguan urban poor have a long-standing history of lacking access to basic services, such as water and sanitation. In the capital city, Managua, the Greater Managua Water and Sanitation Project (PRASMA) was devised to create new water and sanitation infrastructure throughout the city.

This includes a system of low-cost sewage networks designed to target the poor regions of Managua. Although the PRASMA was a solid start, city officials realized that more was needed if they hoped to achieve their goal of reaching universal piped water connectivity.

The Ministry of Finance and Public Credit (MHCP) reached out to the World Bank for funding to create the Nicaraguan Water and Sewerage Enterprise (ENACAL) in order to expand 15,798 water and 19,716 sewer connections to some of the poorest households.

Before ENACAL was launched, only 26.5 percent of households had access to piped water. Only 1.2 percent had in-house toilets. The majority of the population, more than 72 percent, used latrines. The remaining portion of the population concerned city officials the most, with more than 26 percent lacking access to any sanitation services.

Among the poorest neighborhoods, it was not uncommon to see raw sewage running down the streets. In other impoverished neighborhoods, even for those connected to piped-in water, service was less than reliable. Some households received water as infrequently as two hours per day.

Since collecting $20 million in credit and $20 million in grant money from the World Bank to get ENACAL operational, the project has improved service reliability for 161,896 Nicaraguans as well as increasing the overall financial sustainability of its operations.

The World Bank reported a little less than half of the money was used to expand and add additional infrastructure. The remainder of the funds were used to optimize technical efficiency and strengthen institutional activities.

Moving forward, ENACAL is developing the Master Plan for Operational Efficiency in Managua. This focuses on non-revenue water reduction and the optimization of energy efficiency.

With the assistance in the funding of $300 million from the World Bank and other international donors, continued improvements under the Program for Human Water and Sanitation will take place over the course of the next 15 years.

Thus far, ENACAL has benefited 62,295 residents and improved the percentage of households with access to water for 16 or more hours a day to 72 percent.