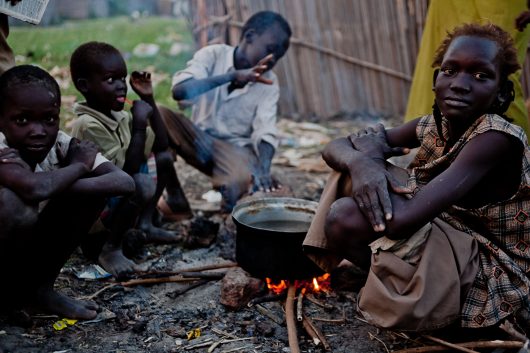 South Sudan gained independence from Sudan in July 2011 following several decades of war. It is the world’s least developed country as well as its newest. Since its independence, there have been several causes of internal conflict within the newly founded state. Between 2013 and 2015, the outbreak of civil war in South Sudan brought about increasing violence and impoverishment. By 2014, 1.4 million people were forced to leave their homes in search of security. Hunger in South Sudan is still a consequence of the violence.

A famine was declared in South Sudan in February of this year when the number of deaths due to starvation reached an alarming rate. The famine was declared in two different counties home to approximately 100,000 people. Quick and efficient delivery of aid relief reversed famine conditions in these areas by July.

Organizations like World Vision and other nonprofits are aiding children and their families in South Sudan. Emergency food aid and cash transfers for families are the primary forms of outreach. Other means of assistance include supporting the South Sudanese with training and equipment for farming and fishing.

In 2016, Action Against Hunger mobilized expert emergency teams on the ground in Sudan, who delivered immediate nutritional needs to vulnerable communities in the conflicted regions. The group also gathered data to identify the needs of the population using a surveillance and evaluation team and provided treatment to 3,100 undernourished children.

There are still emergency operations ongoing in South Sudan, and immediate assistance is being provided by nonprofit organizations. Organizations like these mentioned and the World Food Programme continue to work with donors and volunteers to support the South Sudanese and reduce hunger in South Sudan.