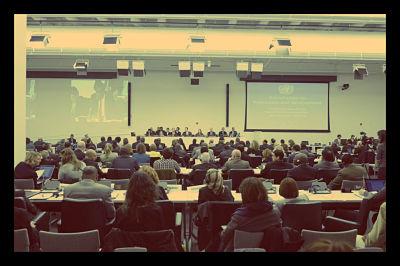 As the world deals with the movement of millions of people as refugees, illegal immigrants, or simple shifts of communities, it is important for countries experiencing these changes in large numbers to recognize that whether they choose to identify it as an issue, for better or worse, it is not going to disappear. Secretary-General Ban Ki-moon led the first day of the 46th Commission on Population and Development in New York whose 5 days conference will address how countries should deal with migration, both internal and external.

It is at a point when halting the movements of people takes more energy and wastes more time than finding solutions that will harness their skills and help them assimilate into their new home. Ban Ki-moon brought up the reality of the situation that “It is not a question of whether to halt the movement of people across borders. The question is how we plan for such movements and make the most of them.” The same 5 goals should be taken into consideration in a variety of situations: whether it is for Syrian refugees fleeing across borders to Jordan or Iraq or Sudanese fleeing Darfur for another region in their country.

While these goals are clearly easier said than done, following this path would ensure that migration is not a win-lose situation but more of a win-win. For countries experiencing such population patterns, we must hope that they understand how important working with migrants is to not only better their lives, but perhaps better the lives of their country’s long time citizens, economy, and general fit into the global arena.

Bieber Concert Tickets Benefit the Red CrossWhat Can $5 Buy Around The World?
Scroll to top