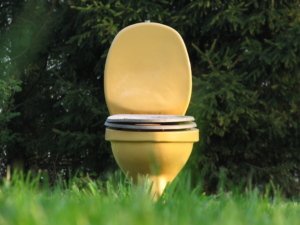 Human waste is typically overlooked, yet it can be a valuable resource capable of solving many of the issues surrounding the world today. As the global population continues to grow, coupled with environmental and sustainability concerns, a solution is needed. More than 700 million people worldwide live in extreme poverty. Some of the challenges they face are food insecurity and access to electricity, clean water and social services like healthcare. Human waste is a sustainable material and replaces non-renewable resources like coal, oil and natural gas. Technology and ideas emerge every day, including new uses of human waste. Interestingly, creative ways to solve the issues surrounding poverty and the future of an expanding world have also arisen.

Each year, humans produce 640 billion pounds of feces and 3.5 billion gallons of urine. Lack of proper sanitation is one of the concerns surrounding poverty as human waste can enter water supplies and cause infections and diseases among people. Feces are typically made up of 55-75% water and the remaining portion is made up of methane and a solid. Once dried, the solid could provide the same amount of energy as coal. If converted into fuel, global human waste would be worth about $9.5 billion. Human waste contains minerals used in fertilizers for crops, which increases crop yields and the nutrition of plants and soil.

Biogas digesters break down human waste into methane, which is then piped through buildings and used in vehicles. The digesters submerge the waste in water where bacteria break down the solids without the presence of oxygen. The resulting fuel is one of the most valued uses of human waste, capable of powering homes, buildings and vehicles.

Sometimes, areas where poverty is common lack access to electricity. Biogas offers a cheaper solution. Installing a biogas digester uses an already present resource to produce fuel on-site rather than relying on an outside company to bring electricity. An example of this is a prison in Malawi that once relied on firewood to run its kitchens. Since installing a biogas digester, inmates at Mulanje Prison no longer have to spend five hours chopping wood in order to prepare food for the day. Moreover, the prison’s electricity bill went down by an average of $400 a month.

The procedure decreases the reliance on firewood, which in turn, slows down the rate of deforestation — a widespread issue in underdeveloped nations. Biogas digesters are also present in other prisons throughout Malawi. In the capital city, Lilongwe, the NGO Our World International takes household waste for its digester and sells the biogas for half the price of natural gas.

Around two billion people worldwide lack access to safe drinking water. A potential solution to this comes from the use of human waste, which involves turning urine into fresh water. Filters and machines rid the urine of salts and ammonia, leaving clean water to utilize for drinking or commercial use. The International Space Station uses a similar process to convert astronauts’ urine and sweat into drinking water. One Belgian solar-powered device removes 95% of ammonia from urine and has the capacity to be used in areas without electricity to provide fresh water. Although many people would not feel comfortable drinking water that came from urine, regions suffering water shortages due to natural disasters or violence will greatly benefit from a much-needed supply of water.

In addition, one of the other uses of human waste, fertilizing crops, is already practiced in many places. Wastewater and urine can also serve the same purpose as feces, adding minerals and nutrients to the soil. All of these uses show the functionality of human waste as an undervalued resource with the potential to decrease poverty and improve living conditions for millions of people.