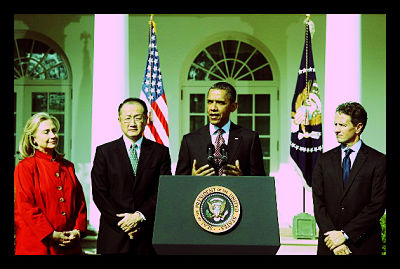 It is constantly said of the profound impact of the United States’ domestic developments have abroad, that when the U.S. sneezes the rest of world catches cold. But what of the bottom 40% of the population of developing countries living in such squalor, unable to afford access to the most basic medical attention?

President of the World Bank Jim Yong Kim warns of the dire effects that a hard credit defaults would have on the world’s poorest. Kim issued these statements in Washington D.C. where this week meetings of the World Bank and International Monetary Fund took place in the wake of the recent government shutdown.

The inaction on Capitol Hill has led to international anxieties that a bill will not be passed on time to raise the U.S.’s debt ceiling, and would thereby create a U.S. default that would result in an international calamitous economic backlash. The U.S. Treasury debt has kept global economies perilously afloat for years, including those emerging economies of developing countries in Asia and Africa.

As the House and Senate continue their standoff, the Treasury Department’s Oct. 17 deadline looms mere days away. World leaders are deeply concerned with U.S.’s perilous waltz at the edge, but in the midst of dense official debate, it becomes easy to forget the repercussions on the world’s poorest people.

In an interview with USA Today, Kim urged legislators to “Please consider politics beyond the Beltway, politics beyond your own districts. Really think about the impact that inaction can have on poor mothers in Africa, trying to feed their children. It will really have an impact on those mothers. It will have an impact on young men and women trying to create businesses in the Middle East. This is real. This is not a theoretical impact. It’s very real.”

In the cold shadow of an uncertain future, President Kim’s words shed light on a cause that all parties and nations can and must agree on: the eradication of extreme poverty. Perhaps it is more fortuitous than darkly ironic that the meetings of the World Bank and International Monetary Fund followed up the United States government partial shutdown.

The talks have surely opened the dialogue to support heroic bipartisanship in Congress in the interest of the global good and sustainability—a responsibility that the United States has the privilege to hold alone.