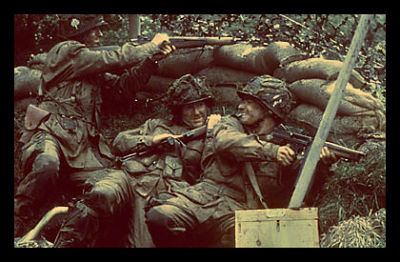 From sci-fi and action thrillers, like E.T. and Jaws, to historical dramas such as Amistad, Schindler’s List, and Saving Private Ryan, director and producer Steven Spielberg has done it all – and he’s done it well. Spielberg has produced and directed everything from amateur releases to box office masterpieces and has won multiple Academy Awards in the process.

A common thread in all his works seems to be his detail and interest in conflict resolution. Time and time again, his characters are faced with impossible circumstances; yet through perseverance and determination, a favorable outcome is usually reached on their behalf. Perhaps this is a means of teaching the audience life lessons.

Spielberg movies teach us about conflict resolution. First and foremost, they teach us that giving up is never an option – Spielberg characters never take an easy out.

Take Saving Private Ryan, for example, when Miller and his troop go searching for the paratrooper, Ryan, they easily could have left after the first bump in the road. However, they didn’t. They kept on searching until they found him, thus making the story the epic tale that it is.

Spielberg audiences are also taught that helping others ultimately helps oneself. This is portrayed in several Spielberg movies. In Amistad, freeing the illegally enslaved Africans gives Americans a sense of morale and gives the country a backbone to rely upon. Again, in Saving Private Ryan, helping Army authorities by retrieving Ryan also helps the fellow soldiers get back home faster. In Schindler’s List, Schindler employs numerous Jews, and in return, is able to gain their love and trust.

Audiences are also taught to fight until the finish. Honorable characters in Spielberg movies stay until the conflict at hand is over, thus exemplifying reliability and loyalty. Take any of the Transformers movies for example – Sam always waits to see what happens and shows courage in the face of peril.

Another component of conflict resolution in Spielberg movies is the fact that characters never leave their men behind. They are loyal until their last breaths.

Last but certainly not least, Spielberg movies teach audiences to be kindhearted—to show mercy and humility to those deserving of it. Spielberg movies show that conflict resolution can be obtained by respecting others, by not boasting in times of advantage, and by only using violence when necessary. “I just know that every man I kill, the farther away from home I feel,” Miller said in Saving Private Ryan.

Steven Spielberg has made a name for himself by which movies he chooses to direct and produce. Nearly all movies associated with Spielberg teach some form of conflict resolution to its viewers. The reason for this is not really known, but audiences hear his messages loud and clear. Spielberg’s thoughts and theories on conflict resolution seem to be both rational and reasonable, leaving plenty of food for thought. What if more people adapted to these methods of conflict resolution?