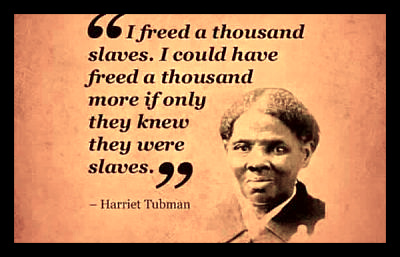 King is arguably one of America’s most influential civil rights activists of all times.  He was able to achieve significant political change through his non-violent protests and demonstrations, which advocated for equality between all races.  In 1964, King was awarded the Nobel Peace Prize for his work towards social justice and he selflessly donated all of the prize money of $54,123 to the civil rights movement.  He is best known for his “I Have a Dream” speech, which has inspired humanitarians all over the world.

Tubman was an African-American who overcame slavery just so that she could save others from the same fate.  Tubman was born into slavery in Maryland in 1822 and was often beaten by her master until she was able to escape to Philadelphia in 1849. Even after escaping such a difficult life, she risked it all to return to Maryland, as well as multiple other states, in order to rescue others.  Throughout her life, she led 13 different missions that rescued 70 slaves by using the Underground Railroad.  She also spied on the Confederacy during the Civil War for the Union.

Gates, Chairman and CEO of Microsoft, is one of the richest men in the world and virtually has been since 1995, but many people do not realize his immense wealth is nearly $80 billion. Exactly how much Gates has pledged is not known, but he has donated at least $29 billion of his fortune to charitable causes. He donates to multiple causes, but is very devoted to eradicating malaria and as part of the Bill and Melinda Gates Foundation; multiple awards have been presented to him because of his humanitarian efforts.

Mother Teresa was a devout Catholic trained by the Sisters of Loreto who started her career of serving others by traveling to India.  There, she worked as a teacher, and having observed the extreme poverty existing in India, she started a new order called The Missionaries of Charity.  The main goal of this order was to look after the people that nobody else was looking after.  She spent 45 years of her life helping others and received the Nobel Peace Prize for actively helping the poor in every way possible.

Gandhi moved from India to England to study law after the death of his father in 1888.  There, he studied not only law, but also two religious texts: the Hindu Bhagavad Gita and the Bible.  He remained committed to both scriptures for the entirety of his life because the Bhagavad Gita awakened a sense of pride for India in him and the teachings of humility and forgiveness from the Bible inspired him to lead India to independence from Great Britain.

For 30 years he advocated for peaceful protests and demonstrations to lead the British to relinquish India from their hold.  He was also a recipient of the Nobel Peace Prize owing to his efforts and philosophy that inspired movements for freedom and civil rights around the world.