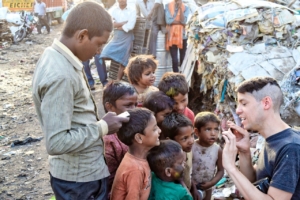 Dreams can come true in the most unusual ways. For some Indians, their dreams came true through a teenage-oriented, pop song dancing social media app called TikTok. In the ever-growing age of the internet, TikTok has been able to connect India’s poor with the rest of the world, something that no other platform has been able to accomplish. TikTok has fought poverty in India by making simple workers into celebrities. The once monopolized entertainment industry is now wide open for aspiring actors and artists. TikTok has made what many found to be a dark and dirty life into one of glitz and glamour.

TikTok isn’t the first social media app to exist in India. Well established platforms like Facebook and Instagram have been in the Indian market for years. Yet none of them have received the enormous popularity that TikTok has experienced. TikTok is projected to reach 125 million users in India by the end of 2020. This is more than Instagram’s 79 million, and six times more than Snapchat’s 18 million.

This success is attributable to a few reasons. One, TikTok has been able to bridge the historic divide of religion and wealth. While many of India’s direct forms of discrimination have been abolished, there is still a large amount of prejudice within the country. India’s caste system was only abolished in 1950. This system has placed millions of people into poverty with very little opportunity to get out of it.

While far and between, there are still occasional conflicts between Muslims and Hindus.

Social media like Facebook and Instagram are personal. Any prejudice that someone holds in the real world can easily persist online. But with TikTok, many of these rooted divides go away. TikTok has fought poverty in India by creating a social environment that is free of class, religion, and prejudice.

People who were once put down or turned away because of their backgrounds are now free to express themselves. This especially benefits the poor and marginalized.

Traditionally, getting into the entertainment industry required large sums of money. Camera equipment, actors, sets and special effects all add up to create quality content. TikTok, however, just requires a smartphone. Editing, special effects and music are all built into the app. TikTok has fought poverty by giving everyone access to these amazing tools. Despite a large inequality in wealth, around 340 million people use smartphones in India.

This means that many of the poor in India can produce content that is just as good as the rich. And people are paying attention to it. In India, the music industry and Bollywood are one and the same. In fact, many aspiring artists and actors have been turned down because of Bollywood’s iron grip on the entertainment industry. The majority of successful music is from large companies, not small indie artists.

But TikTok has fought poverty by providing tremendous opportunities for those who had none. Gathering a fanbase attracts sponsorships as well as attention from movie studios. There are many stories of Indians in poverty who rose to Bollywood fame through TikTok.

Not only does TikTok subvert the grip that large companies like T-Series have on the entertainment industry, they also provide opportunities for aspiring artists and actors.

Despite TikTok’s tremendous positive impact on India, there are still many concerns about the app. Many people question the threat that TikTok poses.

Authorities have linked TikTok back to the Chinese government, which could undermine national security. On June 29 2020, the Indian government banned TikTok along with 59 other apps.

There was public outrage against this action, and many hope that TikTok will return in the future. But for now, things remain uncertain.

While on the rise, India remains to have a large population in poverty. Around 268 million Indians remain below the poverty line.

But help can come in unusual ways. TikTok has fought poverty in India by bridging historic divides, providing opportunities for the poor and marginalized, and subverting powerful monopolies in the entertainment industry. While there is still some uncertainty as to the security of the app, TikTok has proven to be a force of good for the millions of people in India.