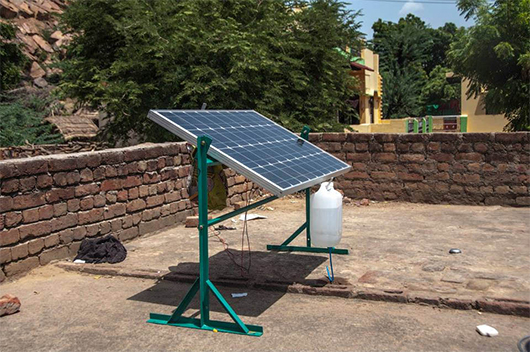 Eden Full was 19-years-old when she dropped out of Princeton University to turn her high school science project into a global technology innovation. She created the SunSaluter, a solar panel rotator designed to collect energy and produce four liters of clean drinking water at the same time.

The SunSaluter is a low-cost solar panel placed on a single axis that rotates towards the sun. The solar panel is mounted on a rotating frame, with a weight suspended from one end, and a specially designed water clock suspended on the other. As the sun rises, the water clock is heated, which forces the water to empty through a purifier and into a container. This process produces four liters of clean drinking water each day.

The rotation is a passive movement that increases the efficiency of the solar panels by 30 percent. The SunSaluter is built using low-tech tools and materials, making it a perfect fit for the developing world.

Not only does the SunSaluter produce more energy that most solar panels because of it’s rotation, it also saves time and energy for those who use it, who otherwise would spend time collecting wood or spending money on gas and electricity. It provides families with electricity and clean water, providing them with resources they did not previously have access.

In 2012, Full installed the first SunSaluters in Uganda, Kenya and Tanzania. In an interview with Triple Pundit, she explains the value of the simplicity of the SunSaltuer. “A lot of the people, mostly women, who gather the water and who would be maintaining these devices, have never gone to school. So it’s very important to actually go out into the field to figure out what kind of technology is needed to match that lifestyle.”

However, the SunSaluter is still a work in progress. Full is working on a business strategy to fund the production, as well as to maximize the efficiency of the product itself. Full is bright and determined, and is pushing for success of the SunSaluter.