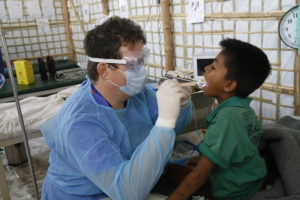 Dengue fever is a severe virus that claims the lives of hundreds of thousands of people every single year. It is present in over 100 countries worldwide, including the Philippines, Honduras and Sri Lanka; however, the country of Bangladesh is currently experiencing the worst outbreak in history.

Not only is dengue fever in Bangladesh a serious threat, but according to the World Health Organization (WHO), the virus is now a rising threat to the entire world.

What is Dengue Fever?

Mosquito bites spread the virus dengue fever. There are multiple strands and severities of the sickness, including severe dengue, which is the deadliest. Symptoms of dengue, which include a fever accompanied by a rash, nausea, vomiting and pain, can last up to seven days. Severe Dengue will make itself manifest within 24-48 hours of infection and generally occur after the fever has dissipated. These symptoms are more severe in nature and include pain, vomiting blood, bleeding from the nose or gums, fatigue, irritability and restlessness.

One of the Top 10 Threats to Global Health

Although dengue specifically affects mosquito prone areas, these areas still include over 100 countries worldwide and 300 million people. This equates to almost 40 percent of the world’s population who are at risk of contracting dengue.

Every year, the virus infects close to 400,000 individuals. From there, over 22,000 die from severe dengue. This virus has slowly increased in prevalence and severity throughout the years, and in 2019 the World Health Organization (WHO) announced that dengue fever is one of the top 10 threats to global health in 2019. The organization explained this was not only due to the hundreds of thousands of cases that emerge every single year, resulting in horrible death tolls across multiple countries but also because the prevalence of dengue has increased 30 percent in the last 50 years.

What is Happening in Bangladesh?

Bangladesh is currently experiencing the worst outbreak of dengue fever to date. Dengue has been a growing threat for decades, with longer seasons of infection, rising death tolls and changing symptoms. Now, dengue has infected Bangladesh with previously unforeseen ferocity.

With such a severe outbreak in the country, Bangladesh is doing all it can to ensure the health of its people. For example, The Communicable Disease Control (CDC) unit of The Directorate of General Health Services (DGHS) releases regular updates on the situation of dengue fever in Bangladesh in order to inform the public of the outbreak and it is doing. It reported that as of August 2019, almost 30,000 dengue patients were able to go home since the beginning of the outbreak. On the other hand, there are almost 10,000 currently admitted patients, and this number is rising by the hundreds every single day.

In order to combat dengue, the DGHS has implemented several strategies. At the beginning of August 2019, doctors in all 64 districts of Bangladesh received training on dengue treatment and management. The DGHS is also focusing on informing the public of prevention measures against dengue by sending messages of awareness through various media platforms and informing journalists in media briefings on various preventative measures.

Dengue fever is a severe and often fatal illness, and a serious threat to global health. Bangladesh is not the only country at risk, and the outbreak of dengue fever in Bangladesh could very well develop in countless more countries. Without serious attention given to the treatment and eradication of this virus, dengue fever will continue to claim more and more lives.