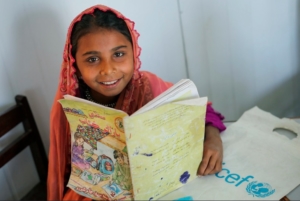 But while 60% of the education population should be women, it is a goal that is missed. Getting girls into these schools is difficult for a couple reasons. The first part of the problem is a shaky economy. The second is that the African continent has only recently been taking the needs of girls seriously.

Social customs illustrate how men are considered more valuable all across the continent. Women are expected to feed men first and give them the best food, and women are also expected to work menial jobs.

A glimpse into the life of girls in school can also demonstrate why women think hesitate to send their daughters to school. Girls who are barely teenagers often voice their fears of being sexually abused when they use the latrine. At a primary school in Enjolo Village, a “cleansing” initiation involves the teacher having sex with young girls. The man could be in his 40s and 50s while the girl could be as young as 10.

The practice caused an influx of young pregnancies and also spread AIDS at an alarming rate. A group of mothers were able to halt the tradition in Enjolo and now girls drink a glass of herbs but elsewhere, the sexual cleansing continues.

While it is not as horrifying as a sexual cleansing tradition, there is another problem that symbolizes the battle women wage in schools. In many areas of the continent, schools are not equipped with latrines or other sanitation that only girls need. They lack the basic facilities that would allow the girls to not miss days of school.

With all the problems barring girls from school, research suggests that the old African saying is true when it insists that it is worthwhile to be educating women.

Educating girls reduces the chances of teenage pregnancy, making them more likely to wait to get married. Education increases earning potential by astronomic figures and by extension improves the economy of the community. Areas with high percentages of educated women are consistently ranked as less dangerous.

There are health benefits as well. Educated women are three times less likely to contract HIV, and they are better informed about nutritional and sanitation habits to keep children healthy.