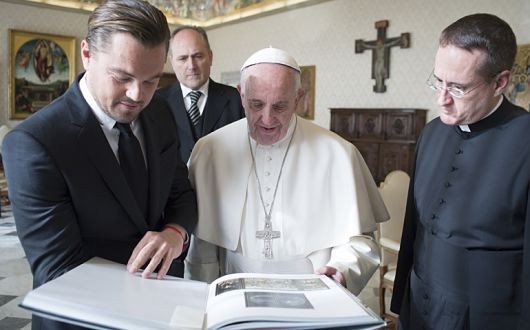 Leonardo DiCaprio’s charity work spans a wide range of worthy causes. He has used his celebrity status to raise awareness for HIV/AIDS, conservation efforts, disaster relief and poverty alleviation. According to the celebrity news source Look to the Stars, DiCaprio has made charitable contributions to 20 different foundations in support of 17 causes.

In 1998, when he was 24 years old, DiCaprio recognized the importance of protecting the environment and the need for building a sustainable future. He established the Leonardo DiCaprio Foundation (LDF) to contribute to this cause.

Since 2010, the LDF has donated over $30 million to fund high-impact environmental projects in more than 44 countries, according to the organization’s website. “I play fictitious characters often solving fictitious problems,” DiCaprio said in an interview with the Telegraph in January 2016. “I believe mankind has looked at climate change in the same way, as if it were a fiction. But I think we know better than that.”

DiCaprio’s unwavering commitment to the environment earned him the role of United Nations Messenger of Peace in September 2014. “[DiCaprio’s] global stardom is the perfect match for this global challenge,” said U.N. Secretary-General Ban Ki-moon at a press conference at that time.

Charity Navigator, an organization known for guiding intelligent giving, noted DiCaprio’s involvement in the National Resources Defense Council, WildAid and the World Wildlife Fund on their list of celebrities who put their star power to good use. The LDF raised over $25 million at its inaugural gala in July 2014 thanks to auctioned items from Bono and Simon de Pury, according to Vogue Magazine.

DiCaprio’s charity work extends beyond the realm of fundraising galas or speaking to world leaders. While most celebrities use Facebook, Instagram and Twitter for self-promotion, DiCaprio’s accounts are devoted to causes he cares about.

“Leonardo’s website and social media platforms are also dedicated to inspiring the public to take action on key environmental issues,” the LDF website says, regarding DiCaprio’s social media channels. “Growing in reach from just 500,000 followers in 2007 to over 25 million in 2015, Leonardo’s fans have engaged on an array of issues protecting key species — sharks in California, tigers in Asia, elephants in Africa — and calling on world leaders to address climate change.”