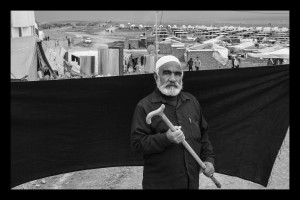 As the violence in Syria and Sudan continues to escalate, photographer Brian Sokol gives us a brief look into the lives of displaced refugees. In his photo project titled “The Most Important Thing,” Sokol traveled to South Sudan and four other countries bordering Syria taking pictures of refugees holding the last object they grabbed before being forced to leave their homes. Sponsored by the UN Refugee Agency, the project profoundly reflects on what we would take if we had to leave everything behind.

Most of the refugees are carrying with them cooking or carpentry tools, clothing or baskets. Bottles, pans, axes, and other essentials are commonly being both easy to carry and vital to rebuilding their lives. Cell phones are treasured because they allow refugees to call loved ones in other camps and carry photos of them as well.

Abdul carries with him the keys to his home hoping that it will still be standing when he returns to Damascus. Twenty-year-old Tamara carries her diploma which she says will allow her to continue her education in Turkey. In eight-year-old May’s photo, she wears a set of bracelets saying that her most important thing was actually her doll Nancy which she had to leave behind in the rush to escape the violence. Omar carries with him a stringed instrument called a buzuq which he says “fills me with a sense of nostalgia and reminds me of my homeland.” Omar remembers that the night he left his home was the same night both his sons were killed.

The most important things for these refugees are items that either helps them survive and work towards a better future or reminisce better times. Twenty-four-year-old Alia of the Domiz refugee camp is confined to a wheelchair and blind in both eyes. She recalls when the fighting occurred right outside her house and being terrified and crying because she did not know what was happening. She says that the only important thing she brought “is my soul, nothing more – nothing material.”

Effects of Drone Strikes on Humanitarian Aid Does Globalization Help or Hurt Women?
Scroll to top