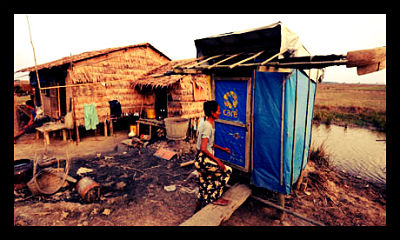 What does the future of toilets in poor countries look like? The Gates Foundation hosted a competition to reinvent the toilet to process human waste without utilizing piped water, sewer or electrical connections and to transform waste into useful resources like water and energy.

Why all the excitement about toilets? In a nutshell, return on investments in sanitation is huge. For every dollar spent on sanitation, 5.5 dollars are returned. At a national level, lack of access to proper sanitation costs countries up to 7 percent of their GDP. In addition to being a smart investment, investing in sanitation is also a moral imperative. Diarrhea is the cause of an estimated 5000 child deaths every day. In areas where people defecate in the open or share large community bathrooms, women and girls are more frequently victimized.

Despite these striking numbers, improved sanitation is neglected at every political level. Without a drastic shift in strategies and the courage to undertake this stigmatized issue, the Millennium Development target of cutting the proportion of the population without access to clean water and basic sanitation by a half will be missed by a long shot.

In addition to the Reinvent the Toilet Challenge, the government of India is running multiple campaigns to improve sanitation such as the “No toilet, no bride” campaign and an information and shaming campaign aimed at changing the culture of open-space defecation.