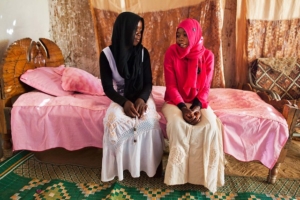 Child marriage, defined as a situation in which a person is married before the age of 18, is considered to be a violation of fundamental human rights. Child marriage generally affects more girls than boys and has been found to limit educational attainment and work opportunities, result in early pregnancy, lead to social isolation and increase the risk of domestic violence.

Globally, child marriage occurs at the highest rate in sub-Saharan Africa, where four in 10 young women are married before the age of 18. While some African countries have been able to make significant progress in reducing child marriage, overall progress throughout the continent has been slow, making child marriage in Africa a primary concern of UNICEF and other international humanitarian organizations.

The child marriage rate in sub-Saharan Africa is 10 percent higher than in any other region in the world. These figures vary in various regions, with 30 percent of young women married under the age of 18 in South Asia, 25 percent in Latin America and the Caribbean, 17 percent in the Middle East and North Africa and 11 percent in Eastern Europe and Central Asia. Within sub-Saharan Africa, child marriage occurs most frequently in West Africa, where 41 percent of young women are married before 18. This rate is 38 percent in Central Africa, 36 percent in Southern Africa and 34 percent in Eastern Africa.

Regionally, some progress has been made in reducing child marriage in Africa, as the rate in Western Africa was 44 percent in the early 2000s, the rates in Central and Eastern Africa were 42 percent. Only Southern Africa has shown no regional progress, remaining at 36 percent for the past 15 years. These reductions are not occurring quickly enough and UNICEF predicts that child marriage rates will remain above 30 percent in Western and Central Africa and above 20 percent in Eastern and Southern Africa even until 2030.

Age and Gender of Child Marriage in Africa

While a majority of child marriages occur between the ages of 15 and 18, there are many women who were married before the age of 15 as well. In sub-Saharan Africa, 12 percent of young women were either married or in a union prior to being 15 years old.

Data on boys affected by child marriage in Africa is limited, but it is still recognized to be a significant problem in some countries. The Central African Republic has one of the highest rates of child marriage for boys in the world, with 28 percent of young men married by the age of 18. This rate is 13 percent in Madagascar and 12 percent in Comoros.

Child Marriage in Ethiopia and Tanzania

Ethiopia provides an interesting case study for child marriage in Africa. Research conducted by the Forward UK, an organization dedicated to improving the lives of girls and women in Africa, reveals the cultural beliefs that cause child marriage to remain prevalent. Marrying girls young is a social norm in the nation, and families whose daughters are not married as children are often viewed in a negative light.

In part, this stems from the importance placed on virginity, and many believe that the earlier a girl is married the more likely she is to be a virgin. Girls may also be married to priests, as this is a way for religious leaders to gain respect. Priests must marry virgins, however, and therefore tend to have the youngest brides. Families also often perceive child marriage as a way out of poverty, as they receive a bride price and no longer carry the financial burden of caring for their married daughter. Some families also want to ensure they will have grandchildren before they die.

The organization conducted similar research in Tanzania, where girls may be married as young as 11 and where most marriages are arranged by the girl’s father without consideration of what she wants. Domestic violence is widespread in the nation, greatly impacting the health and wellbeing of child brides. Husbands generally do not have patience with child brides who may be too young to effectively complete the domestic tasks required of them, making them more likely to beat younger wives. Polygamy is also legal in Tanzania, which can negatively impact young brides.

It remains to be seen whether progress in reducing child marriage in Africa will begin to occur at a faster rate. This progress would have a large impact and could help millions of girls across the continent.