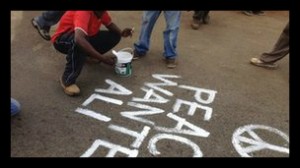 On Monday, the first general elections since December 2007 were held in Kenya. In 2007, the Kenyan election resulted in weeks of bloodshed, making this election an important push for political peace. These elections are also the first held under the new constitution passed during the 2010 referendum designed to avoid violence. Millions of Kenyans arrived at polling stations to cast ballots and vote for their representatives, members of parliament, governors, senators, and president. Running for President are Prime Minister Raila Odinga and Deputy Prime Minister Uhuru Kenyatta. Kenyatta along with his running mate William Ruto are facing trial by the International Criminal Court for crimes against humanity, accused of organizing the riots that took place in the 2007 Kenyan election.

In the minds of every Kenyan election is the violence that occurred in 2007. After incumbent President Mwai Kibaki was re-elected, riots erupted all over Kenya. Supporters of the opposition candidate, Raila Odinga, were enraged by allegations that the election was rigged by supporters of Kibaki. Ethnic violence erupted between members of the Kikuyu, Kibaki’s tribe, and the Luo and Kalenjin tribes, as opposed to the Kikuyu. Eventually, an agreement was reached wherein Kibaki would hold the position of President and Opposition leader Raila Odinga would be Prime Minister. Up to 1,000 Kenyans were killed and 600,000 displaced during the riots which lasted for more than a week. In light of the violence caused by the disputed and controversial election of five years ago, Kenyatta, Ruto, and other major politicians have urged voters to “keep the peace.”

In preparation for this recent election, people stocked up on supplies, food, and fuel, in case of riots did break out. Stores were closed and the roads were empty of cars. People strayed from ethnically-mixed urban areas fearing violence. There was a heavy security presence with trucks of police patrolling polling stations. Unfortunately, the day was not without some incidents of violence. In Kilifi, Mandera, and Changamwe, several people, civilians and police officers alike, were killed. A group of armed men attacked a police post in Mombasa killing at least ten people, including two police officers. The separatist Mombasa Republican Council has denied accusations that they were responsible for organizing some of these attacks. It is uncertain whether the violence that did break out is connected to voting. Police were critiqued as being “ill-prepared” for violence that occurred near polling stations.

10 Ways to Help Poor Farmers and Their Communities World’s Richest Grow: 210 More Billionaires in Past Year
Scroll to top