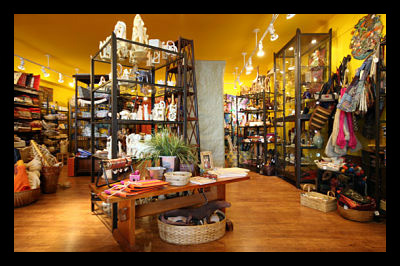 Stopping into any Ten Thousand Villages store, there are multicolored products as diverse as the countries they are produced in. The Akron-based company runs on a Fair Trade business plan with craftsmen in over 38 countries. With over 65 years of business, Ten Thousand Villages has become one of the most prominent Fair Trade businesses in the world.

Many of the artisans employed by Ten Thousand Villages are underprivileged and the long-term contracts with the business create opportunities to alleviate their poverty. Many of the people who receive contracts are women who generally have fewer opportunities in their countries.

As a founding member of the World Free Trade Organization, Ten Thousand Villages has formed a business plan that is being used as a template for other companies with business dealings in poorer nations. Fair Trade models enable the craftsmen to be paid reasonable salaries, generally much higher than those they would be paid by businesses in their home country.

The payment is given in two parts: half when the order is placed and the rest after the product is completed. Together, the artists negotiate a deal with the company to cover their costs of production, as well as an adequate fee.

Through the contracts with Ten Thousand Villages, the artists are able to provide health care, education and nourishment to their families which they might have otherwise not had access to. The trickle-down effect of Fair Trade lasts for generations. More children are able to continue their education and then have more opportunities than the previous generation.

The contracts typically last several years, which provides a stable source of income for the artisans, as well as reliable products for the stores. The products are a homage to the unique cultures and materials accessible.

Though Ten Thousand Villages was one of the pioneers of the Fair Trade model, said model has proliferated to over 350 organizations in more than 70 countries united in the WFTO. One of the cornerstones of the Fair Trade model is to eliminate global poverty through raising wages to livable standards; so far, Ten Thousand Villages is helping achieve this goal.