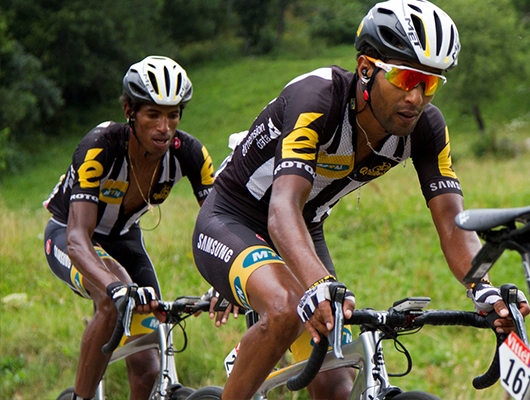 This month, five Rwandan cyclists from Team Africa Rising are set to compete in the UCI Road World Championships in Richmond, Virginia. The international competition is set to take place from Sept. 19 – 27.

Team Africa Rising, formally called Team Rwanda, is comprised of professional cyclists who often serve as the world’s informal ambassadors to Rwanda and other conflict-stricken nations. Team Rwanda was founded in 2006 by American cyclist Jock Boyer in order to spread the sport of cycling and unify countries under its name.

Team Africa Rising is now comprised of over 25 of the best cyclists from Rwanda, Ethiopia and Eritrea. For these athletes, cycling can serve as a form of therapy to deal with their difficult pasts.

The team has also given African athletes the chance to compete at an international level, therefore granting them additional opportunities for sponsorship, equipment and more. One of the cyclists, Nathan Byukusenge, has qualified to compete in the 2016 Rio Olympics.

The cyclists have captured attention from the international community, as the subjects of a documentary entitled “Rising From Ashes” and the book “Land of Second Chances.”

Cycling teams provide a common, positive cause for members of the host countries to support. Team Africa Rising’s participation in the world championship provides a collective source of pride and excitement, particularly for the citizens of Rwanda.

According to Kimberly Coats, director of logistics for Team Africa Rising, the team represents unity for the country.

“The team is made up of people from both sides [of the 1994 genocide,]” she was quoted in the Richmond Times Dispatch. “But today we’re all Rwandans and it’s really started to develop this national unity, this national pride. This team is a thing for the country to rally around.”

For the past 21 years, Rwanda has focused on healing itself from the historic genocide and growing together as one Rwandan society. One of the major struggles in developing in the wake of such a mass atrocity has been in providing the international community another way to look at the country.

“You say Rwanda, you think genocide. They want you to say Rwanda (and) think cycling,” Coats said. “It’s going to take time, but it’s definitely there. We do a lot of bike tours, a lot of people come visit the team and the team has been goodwill ambassadors to show the world that Rwanda is a safe place, that the country has reconciled and that there’s peace.”