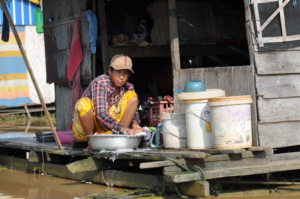 A 2018 article by The Asia Foundation stated that roughly 12% of the global population depends on fisheries and the aquaculture industry for their livelihoods and more than 50% of the global population relies on fish and seafood as a major source of protein. Over the past few decades, Southeast Asia has established a fishing metropolis but the region has struggled with illegal, unreported and unregulated fishing. However, in the last five to 10 years, the region has begun to regulate Southeast Asia’s fishing industry and watch for illegal fishing. There are many important reasons to regulate the fishing industry, including keeping the ecosystem healthy and populated.

The Asia Foundation said that about “64[%]of the fisheries’ resource base is at a medium to high risk from overfishing.” Cambodia and the Philippines hold the highest risks. Some common methods of destructive fishing are:

Most of the overfishing destruction seen in Southeast Asia is due to illegal, unreported and unregulated fishing (IUU). In 2018, The Asia Foundation said that to keep the fishing industry of Southeast Asia alive, the region would “need to decrease all destructive fishing practices and reduce harvest by nearly 50%.”

The world widely recognizes that fish is a vital source of food. Low in saturated fatty acids, a source of protein and an excellent source of omega-3 fatty acids, fish is consumed across the world. There are several concerns when it comes to the relationship between overfishing and human health.

To begin with, overfishing harms the marine ecosystem. From pollution of oils and gas via fishing boats to removing an unnaturally large fish population from the seas, there is a clear trend of regression of reefs and shifts in the marine ecosystem food chain.

At the top of the food chain, humans feel the ripple effect below them. If the location of fisheries experiences pollution due to fishing techniques such as poison or blast fishing, then humans eat the polluted fish.

Although these factors may impact the health of humans, just as significant is the concern of food security. According to Reuters, “In Bangladesh, Cambodia, Gambia, Ghana, Indonesia, Sierra Leone, Sri Lanka and some small island developing states, fish contributed 50% or more of total animal protein intake.”

In March 2018, The Asia Foundation met with the U.S. Department of State, the Royal Thai Government and the People’s Republic of China to create a regional assessment of fisheries to safeguard food security in Southeast Asia and Southeast Asia’s fishing industry. Specifically, experts from these groups looked into developing a legal framework to improve fishery management and combat IUU fishing. In addition, the groups looked at “emerging new technologies to support sustainable fisheries management.”

Most of Southeast Asia consists of developing countries that do not have the accessibility and financial support to outsource fish and protein in the event of the fishing industry collapsing, not to mention the millions of job losses that would ensue. Policy and regulations to better control Southeast Asia’s fishing industry will not only allow for a sustainable fishing environment but will also increase food security and ensure better health for Southeast Asia.