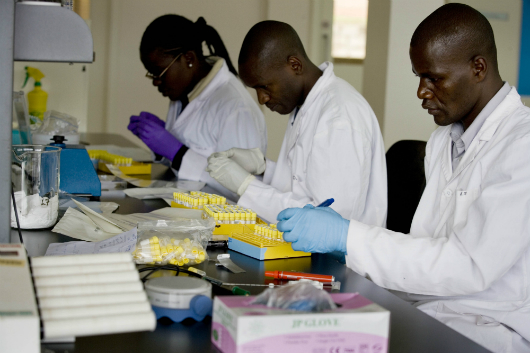 The President of the Academy of Science in South Africa, Daya Reddy, claims that scientists play a key role in global poverty reduction. The problem is that the number of scientists in Africa is significantly less than anywhere else in the world. In other parts of the world, for every 1 million people, there are 1,000 scientists. In Africa, this number is 80. The second problem is what Reddy calls “the brain drain,” where one-third of Africa’s scientists leave the continent to practice their research.

Because of this, Africa’s success in poverty reduction is significantly lower than elsewhere. While worldwide poverty has been reduced by 50 percent, in Africa it has only been reduced by 8 percent.

Scientists hold the key to unlocking great mysteries, which is why Reddy teamed up with the Association of Commonwealth Universities and the South African Research and Innovation Management Association at the Research and Innovation for Global Challenge conference in May to encourage students to pursue their interests in science. In his speech, he highlights the importance of interdisciplinary studies, encouraging a “healthy collaboration”.

Reddy encourages scientists to use their knowledge of research and apply it to the world at large. “Complex problems require broad transdisciplinary approaches for their solution,” said Reddy, explaining later that this is the business of bringing together scientists with the movers and shakers of the world—the decision-makers and policy-creators, the educators and the innovators.

Scientific advancements can help in many ways, from improving the daily lives of individuals to large-scale changes. From medicine to sanitation, to agriculture and transportation, science is a unifying factor with the potential to make big changes in the world.

Great advancements have already been made, thanks to interdisciplinary work. Since the Millennium Development Goals established in 2000, now 90 percent of children globally are going to primary school, more girls are getting an education than ever before, and the odds of a child dying before the age of 5 has been cut in half. Worldwide, poverty has improved since the goals were established.

Reddy spoke at a conference in May to inspire students to pursue science. He encouraged the next generation to collaborate and create an interdisciplinary culture in order to end global poverty.