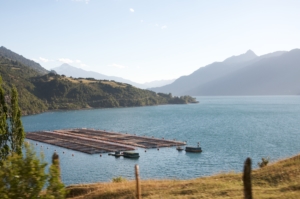 Salmon farming in Chile has grown to become one of the nation’s top trading exports. Chilean salmon farming now produces “25% of the world’s supply” with more than 1,000 fish farms in operation. It also created 61,000 jobs. In recent years, however, the practice has come under fire due to the overuse of antibiotics and environmental damage to surrounding wild fisheries. Chile’s aquaculture has brought in much-needed revenue to the economy. However, it has also threatened many impoverished indigenous communities, such as the Kawésqar, who have lived in Patagonia for thousands of years. Chile’s fragile ecosystems and artisanal fishing culture are at risk of being degraded from the country’s poorly regulated farmed salmon industry.

Once considered a seasonal delicacy, salmon is now one of the most widely available superfoods on the market. The fatty fish is rich in omega-3 fats, selenium and several B vitamins. It has also been attributed to lowering the risk of illnesses and conditions such as heart attacks and strokes. Store-bought salmon is either wild-caught or farm-raised. The Monterey Bay Aquarium’s Seafood Watch program rates wild salmon, particularly from Washington, to be one of the best sustainable seafood options. The company suggests avoiding farmed Atlantic salmon from Chile.

One of the biggest concerns of salmon farming in Chile is the high levels of antibiotics and pesticides used to fight diseases and parasites in the net pens. In 2014, the industry used 1.2 million pounds of antibiotics in their marine enclosures. In comparison, Norway used roughly 2,142 pounds. The overuse of antibiotics like florfenicol and oxytetracycline can create antimicrobial resistance. This could lead to public health issues, as well. Since both drugs are regularly used in human medicine, more studies are needed before Chilean salmon farming companies continue to use them responsibly.

The salmon farming industry threatens Chilean artisanal fishing, which relies on the ocean’s natural abundance for their livelihood. In 2016, massive red algae bloom toxified almost all of the wild shellfish in Southern Chile, putting enormous economic pressure on local fishing communities. Thousands of fishermen protested the lack of governmental response and aid during one of the country’s worst red tides.

In southern Patagonia, local community members and campaigners celebrate a rare victory of protecting Chile’s coasts from salmon farming operations. The combined efforts prevented the raising of 1.9 million fish and construction of 18 industrial cages in the Beagle Channel. The remote untouched habitat stretches over 240 kilometers. The Channel is also home to a wide array of species, including whales, dolphins and penguins. Indigenous groups like the Kawésqar fish these waters, continuing to be a vital natural resource today. The protection of the Beagle Channel is also a victory for the region’s tourism industry. The Beagle Channel contributes $74 million annually to the local economy.

With salmon farming in Chile becoming more regulated, traditional fishing communities can continue to harvest seafood off their coastline. Local wild-caught fisheries, along with eco-tourism, are sustainable options for traditional Chilean fishermen. Historically, the indigenous people of Chile ate and dined on hundreds of different species of fish and marine life. With more government regulation and support, Chileans can continue to gain economically from the seas while also protecting them.