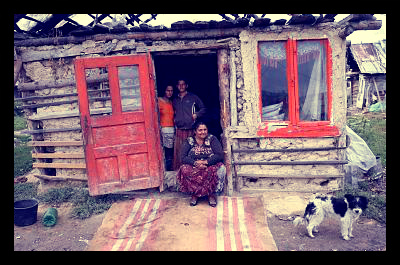 Romania, the small country in southeastern Europe, has struggled with poverty throughout its history.  The traditionally agricultural country has floundered since ceasing to be a communist state in 1989.  Poverty is most pronounced in rural areas, which are home to 44% of Romania’s population.

Low agricultural production is a large problem for the rural poor.  Additionally, there are few opportunities for formal employment or higher education outside of urban areas of Romania. Remote mountainous areas receive little support from the government, and suffer from a lack of social services, infrastructure, sanitation and opportunity.

Poor Romanians often leave in search of better opportunities overseas, sometimes at rates of hundreds of thousands per year.  The earnings sent home by these emigrants have made up as much as 6% of Romania’s GDP.  While poverty is a clear and large scale problem in Romania, the government has no formal policy to help raise the employment rate or improve conditions in rural areas.  In fact, there is a marked absence of government initiatives to reduce poverty.

One ethnic group in particular is plagued by poverty, illiteracy, squalid living conditions as well as government discrimination and social persecution.  The Romani people, known negatively around Europe as ‘gypsies’, were held as slaves around Europe until the mid-eighteen hundreds.  They were exterminated by the Nazis on a large scale, and continue to be mistreated around Europe.  Romania is home to as many as two million Roma people, and they are five times as likely as other groups to live in poverty.

Frequently, Roma, like other Romanians, leave to find work and better fortunes in more affluent parts of Europe.  Many Europeans discriminate against the Romani, however, and an influx of Roma people in France has contributed to the recreation of racist, fascist groups from the 1940s.

Romani people often live in segregated neighborhoods, or in their own villages entirely.  One such village, in a rural region of Romania, is generally ignored by the authorities and does not even appear on maps despite its population of over 500 people.  The citizens of Ponorata live without electricity, in handmade wooden homes and frequently in conditions that have been described as ‘medieval’.  Illiteracy and unemployment are rampant.

The plight of Ponorata is a symptom of a wider problem in rural Romania, which is the lack of initiative taken by the government to solve the poverty of these areas. While some non-governmental organizations run schools and health centers, there is a desperate need for a more widespread and coordinated strategy to improve the quality of life of Romanians, especially the Roma.