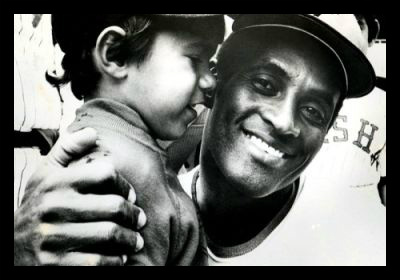 He amassed 3,000 hits and four batting titles in his seventeen-year career with the Pittsburgh Pirates.  He was the NL MVP in 1966, and helped guide the Pirates to a World Series crown in 1971.  Add twelve consecutive Gold Glove Awards for defensive excellence in right field and Roberto Clemente’s resume as one of the greatest players in the history of Major League Baseball is impressive.  Clemente’s legacy, however, goes far beyond key hits and defensive web gems.

Roberto Clemente was MLB’s most beloved humanitarian.  Born in Puerto Rico in 1934, Clemente worked tirelessly to promote greater accessibility and equality for Latino Americans, both within baseball and outside of it.  Clemente was famous for hosting baseball clinics for underprivileged youth free of charge.  He also delivered significant financial aid to people in his native Puerto Rico, the Dominican Republic, and other countries in Latin America.

Clemente made a reported annual salary of $125,000, which amounts to less than $1 million in today’s terms.  Yet Clemente still made charity a focal point of his professional life.  Clemente once famously said, “There is nothing wrong with our homes, our country, that a little more care, a little more concern, a little more love, won’t cure.”  Clemente’s vision of humanitarianism is one that contemporary athletes should take to heart.

And many have.  Since 1971, MLB has given the Roberto Clemente Award to the player who exemplifies Clemente’s commitment to community involvement.  This year’s winner is St. Louis Cardinals outfielder Carlos Beltran.  Beltran created the Carlos Beltran Foundation to support academic achievement for underprivileged youth.  This culminated in the opening of the Beltran Academy in Puerto Rico, which will house a state-of-the-art learning facility for young students and athletes.

A few months after reaching the exclusive 3,000 hit club, Roberto Clemente flew to Nicaragua.  The country was reeling after a devastating earthquake in 1972.  Clemente was traveling to Nicaragua to deliver relief and aid supplies, a further example of his devotion to humanitarianism.  His plane crashed en route to Nicaragua on New Year’s Eve in 1972.  Roberto Clemente died at the age of 38, fighting to help those in need.