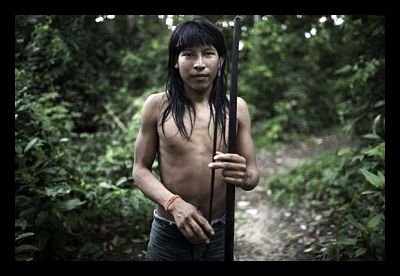 For decades, illegal loggers have invaded the Awa’s ancestral lands, which lie deep in the eastern corners of the Amazon rainforest. After them, settlers arrived, who farmed and built structures where there was once an abundance of nature, wildlife and a source of food for the Awa.

As their land has been ripped up by deforestation, most of the Awa have given up on their traditional lifestyle and moved into villages for protection.

Illegal loggers have often been aggressive to the tribe when they have been confronted, and loggers have even shot and killed indigenous people in the past.

Many of the Awa can tell stories of being on the run from the loggers and being driven away from the lands, on which their families have lived in for generations. Some have missing children who got lost when it became necessary to flee from the loggers, their machines and the destruction, which always follows the loggers’ arrival.

But now the Brazilian government is taking a stand and trying harder than ever to protect the rights of the Awa.

Dubbed “Operation Awa,” the government is cracking down on illegal logging farms and resettling the people who occupy areas where there was once rainforest. Families are given notice to pack up and are offered new homes on legal territory by the state.

The great news is that it seems to be working.

The Brazilian environmental agency is working alongside the military police and air force and ripping down any illegal structures they find. They often bring indigenous people along so the Awa can personally witness the efforts being made to help them claim back their land.

The Awa are thought to number around 450, with some still living in the rainforest uncontested. Brazil‘s National Indian Foundation believes that there are 77 isolated indigenous tribes in the amazon, while in 2013, only 30 had been located.