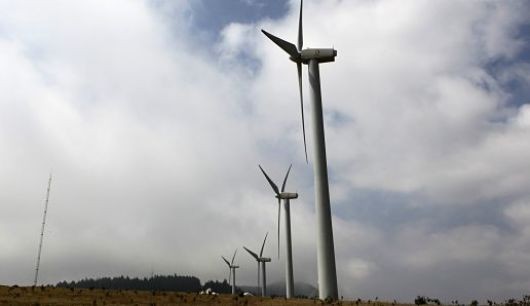 Kenyan President Uhuru Kenyatta recently broke ground at the site of Africa’s largest wind-power project in Marsabit County, Kenya, which began construction earlier this month. The farm is part of an initiative that will see Kenya become a world leader in renewable energy generation, with a fifth of its energy set to come from the wind turbines when it becomes fully operational in 2017.

The Lake Turkana Wind Project covers 40,000 acres and will be powered by a high-intensity jet stream originating in the Indian Ocean. The farm will consist of 365 wind turbines and is expected to achieve 68% load capacity factor, making it the most energy-efficient wind power farm in the world.

The farm is one element of the Kenyan government’s goal to add 5,000 megawatts of power to its national grid over the next three years, reducing its dependence on hydro and fossil fuels. In 2012, Kenya’s Ministry of Energy announced that vast oil reserves had been discovered in the country’s Turkana region, and four major petroleum basins were being evaluated for economic feasibility. The massive Lake Turkana wind project will provide 20% of Kenya’s energy consumption when fully operational, making the country a prospective leader in renewable energy and weakening the economic argument for accessing these previously untapped fossil fuel reserves.

A government entity called Kenya Power has signed an agreement to buy the power at a fixed price over the next 20 years to guarantee that the wind power is converted into accessible electricity for the Kenyan people. According to a 2013 report published by SunnyMoney, the largest distributor of solar-powered electricity in Africa, 19% of Kenya’s population, or 34 million people, currently live without electricity. Ninety-two percent of rural Kenyan households rely on kerosene for lighting, which can cause permanent eye and lung damage, is too dim to study or perform work after dark, and is extremely expensive, costing off-the-grid families up to 25% of their monthly income.

While Chinese investors have funded many of Africa’s construction initiatives in the last decade, the $690 million Lake Turkana farm is being funded by investors in the European Union under the leadership of the African Development Bank, a development finance institution that contributes to the social progress of African countries. The project is the largest single private investment in Kenyan history.

Due to Kenya’s arid climate, economic opportunity for civilians is limited to animal husbandry and small-scale farming operations. The wind project is set to create 2,000 jobs during the construction phase and over 200 full-time jobs when fully operational. It is also likely to generate thousands more employment opportunities in the form of national power grid operations, electricity distribution and infrastructure.

“As the turbines will be at full production all of the time they will need servicing twice as often as similar units sited in Europe,” said Project Director Carlo van Waginengen in an interview with African Business Review. “As soon as the substation goes live we will be electrifying the largest towns in the area.”

Lake Turkana will also benefit Kenyans in the form of comparatively low energy costs: power from the plant will cost just 8.42 cents per kilowatt, nearly four cents lower than the average cost of electricity in the United States.

Because the power generated by the farm is green energy, the United Nations has registered Lake Turkana under a mechanism that will allow the project to generate carbon credits yielded around $4 million toward local community development. The project has been designed to allocate funding toward business development in the region as part of a 20-year plan.

The Lake Turkana Wind Program represents a long-term investment in energy production and community development in Kenya, and provides a legitimate alternative to the short-term economic thought that generally motivates fossil fuel extraction. Projects like this provide opportunities for investors looking to realize returns on sustainable energy initiatives, expand access to basic necessities for local communities and improve economic climates in ways that are sustainable both to the African people and the land that they live on.