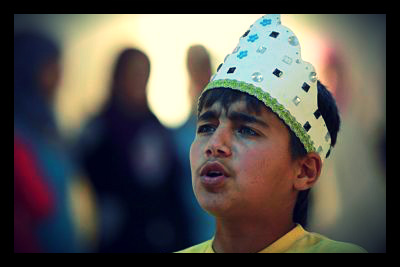 Struck by the catastrophic circumstances of their previous lives in Syria, children in the Zaatari refugee camp in Jordan spoke of bullets, bombs and death. Nawwar Bulbul wanted to change that. A prominent soap opera actor until being blacklisted by the Syrian government on account of joining in protests against the regime, Bulbul brought his love for theater with him as he fled.

The Zaatari Camp in northern Jordan has ballooned with the recent inundation of Syrian refugees fleeing over the border and, with a lofty 102,704 residents, according to United Nations High Commissioner for Refugees, currently stands as the world’s second-largest refugee camp. Basic needs such as food and water are met on a marginalized basis by various international organizations attempting to help quell the trauma of the current Syrian crisis, yet children require more than that in order to live with the hope of successful and fulfilling futures. With less than 40 percent of refugee children attending school, there is a huge deficit of arts and culture among traumatized population.

For over two months, Bulbul has worked to bring happiness to the lives of these children. Because of the impressive initiative taken by this actor-turned-director, 100 refugee children come together to rehearse Shakespeare’s “King Lear.” Translated to classical Arabic from its original Bard’s English, the play brings joy to its performers and a renewed sense of childhood innocence to those who have been stripped of such rights and privileges.

One young girl named Ammari, who came to Jordan along with five sisters and a brother, says she feels the transformation.

“I do not feel lonely any more in this place,” she told reporters. She has found something to finally entertain her and take her mind off of the victims of calamity around her.

Though some may claim that this particular Shakespeare tragedy is not suitable for children, Bulbul argues otherwise. He says he took only the roots of the story for the children’s adaptation, and focused primarily on the differences between lying and telling the truth. While Bulbul’s initiative received no support from international organizations and only minimal support from friends in the Syrian community, the past two months of play practice have shown outstanding success for the youth.

In discussions of Shakespeare’s plays, the participants showed behavioral and emotional development. The children involved learned quite a bit about controlling anger as well as the violent and destructive consequences of seeking revenge. For a group that has spent a good portion of life so far living amid death, destruction and humiliation, these are lessons some may have thought unfathomable in previous months.

Yet Shakespeare is not the only poetry in this situation. Bulbul translates from Arabic to mean bird, or oftentimes nightingale, a bird primarily known for singing in the dark. So as Nawwar Bulbul brings the song of hope and joy to the inner darkness of an overpopulated refugee camp, he does, so beautifully, live up to his name.