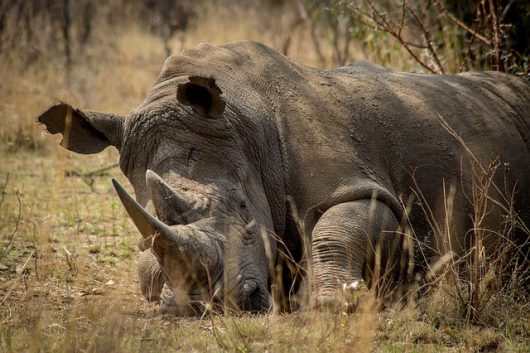 Poaching rates have climbed at an alarmingly fast rate. In fact, with continued growth, it is predicted that most of Africa’s vulnerable wildlife will be extinct by the end of the average person’s lifetime. The statistics indicate that there has been a 5,000 percent increase in rhino poaching alone throughout Africa between 2007 and 2011.

Several studies have attempted to determine the main cause of poaching, or illegal hunting, throughout Africa; the main source was found to be poverty. These same studies have shown how reducing poverty eliminates poaching, and stress the necessity to address this serious problem.

Poaching is a form of income for poor households throughout Africa, and it is especially effective for those who live in rural locations near wildlife preservations. Those who are arrested for poaching activities in national parks were significantly poorer than the rest of their communities, and more likely to live closer to the parks and therefore further from local trading centers.

There have been many strategies put in place to attempt to protect wildlife throughout Africa. Strategically placed rangers on the plains, wildlife preservation parks and punishments for violators are some of the measures that have been taken. However, these have proven ineffective; an average of two rangers are killed each week protecting wildlife, and prison sentences for poachers tend to be less than one month due to costs of food and housing for the inmates. The solution, therefore, resides in stopping poaching at its root: poverty.

A study by Eli Knapp found that poachers who described themselves as living in absolute poverty admitted killing these animals as a food source. These same people also asserted they would quit poaching permanently if they could earn income through other means. Poorer members of a community tend to poach more fiercely and for a longer period of time than those who merely poach for sport. It is important for these people to not feel so poor in relation to their peers in their community. Merely narrowing the income gap between residents will, in turn, decrease the rate of poaching.

Another study analyzes why people in poverty tend to poach and illuminates how reducing poverty eliminates poaching. Rosaleen Duffy argues that poverty results in a person feeling a lack of power, prestige and voice in their life, and poaching may be a means of seeking status in a community. While poaching is still seen as an illegal activity, in most communities it has become a local custom and brings higher prestige to people.

Poaching not only provides these poor communities with material needs of food and money, but also provides a way to meet non-material goals. Cutting poverty at its source will allow these people to increase their status while also preserving wildlife.

Although there have been many studies showing how reducing poverty eliminates poaching, there are still many other factors at play in this illegal activity. Reducing poverty will not completely eliminate all poaching, but it can drastically decrease the deaths of endangered species and other precious wildlife throughout Africa.

Addressing How to Stop Poverty: Steps Everyone Can TakeThe Importance of the READ Act and Literacy Education
Scroll to top