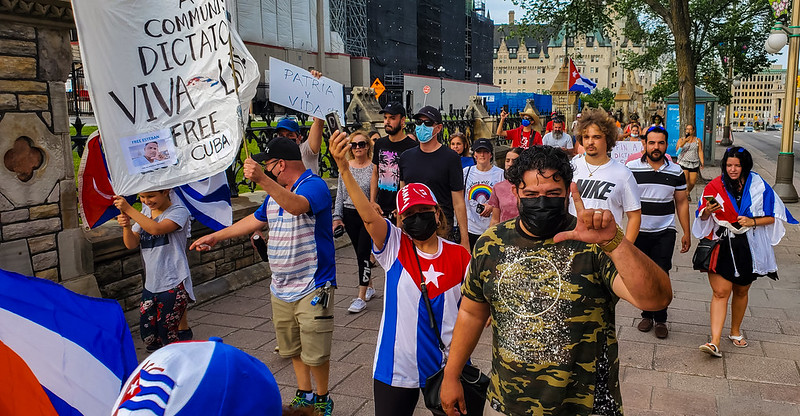 Amid the COVID-19 pandemic, the country of Cuba has seen tremendous uproar from its citizens. Thousands of people have taken to the streets protesting against the communist regime in the most significant Anti-government revolts in decades. Protesters have spanned across 30 different areas around the island, including Havana. The protesters have thwarted the government’s attempts to keep the protests in Cuba under wraps by showcasing their efforts via social media, making the revolting world-known.

What are the Protests in Cuba About?

The current protests are responding to several issues that emerged during the pandemic. Some problems include an 11% decrease in the nation’s economy, leaving many citizens without food to eat and no medicine to treat their sick. They are protesting against the dictatorship regime and want to fight for more freedom in what they do. They are also protesting against the government’s handling of the COVID-19 pandemic, which has infected over 7,000 people and killed 47.

When the coronavirus hit, Cuba had to close its borders, preventing tourists from visiting the island. The United States imposed sanctions on sugar exports, costing the government $5.5 billion in 2020. As a result, Cuba is experiencing an economic crisis, which has resulted in the loss of many jobs and an increase in unemployment.

In response, citizens have taken over the street, successfully shutting down entire expressways for their cause. Beginning on Sunday, July 11, citizens have taken to social media to express their outrage for their leaders. They were requesting a political change, vandalizing areas in which they operate and attempting to deliver their message.

“It’s time for things to change. The situation is critical,” said 22-year-old construction worker Christian Veliz in an interview with AP News.

The Cuban Government has then reacted to these protests with police authority. So far, the police have dispersed all demonstrations across the country, even going into people’s homes to arrest them. Police arrested and locked up about 100 citizens. Another 150 to 200 people have reportedly gone missing.

“People are dying in the streets at the hand of the police. The government denies help to those hurt,” said Adrian Artega in an interview with Wink News.

To stop the protests, the government has even shut down the internet nationwide, making it difficult for people to communicate and continue their efforts on social media. Cubans are now using word-of-mouth and social media to keep the protest going and gain international support.

After a while, the Cuban government softened its stance on the protesters and tried to defuse the situation. Now that Cuba has lifted the internet ban along with food and medicine taxes, all Cubans can access these goods. However, many feel as though it is too little, too late.

“No, we don’t want crumbs. We want Liberty. Blood has not run in Cuban streets to be able to import a few suitcases,” tweeted by government critic Yoani Sanchez.

Local and International Supporters of the Protesting

Along with the lifting of trade restrictions, there has been an answer to Cuban protesters’ calls for help. Several musicians of Cuba, such as Adalberto Alveraz, the Elito Reve Orchestra and more, have voiced their support for what is happening in Cuba.

The U.S. government and President Biden have also lent their support to the protesters and Cuba. They have even stated that they would like to send assistance to Cuba when they are able.

“There are many things we are considering doing to help the people of Cuba, but that would require a different circumstance or a guarantee that they would not be taken advantage of by the government,” said President Biden.

President Biden and Homeland Security have since developed a hardline policy toward Cuba. This has resulted in the fourth round of sanctions against the Cuban government in the hopes of forcing Cuba’s top officials to change their ways and finally appease its citizens. Biden, who sympathizes with the Cuban people, has stated that he will continue to impose sanctions on Cuba until the conflict resolves.

“There will be more [sanctions] unless there’s some drastic change in Cuba, which I don’t anticipate,” said Biden in a meeting with the Cuban American leaders in the White House.

Although protesters have made demands and received support, protests in Cuba are still ongoing as citizens rally for a better government.