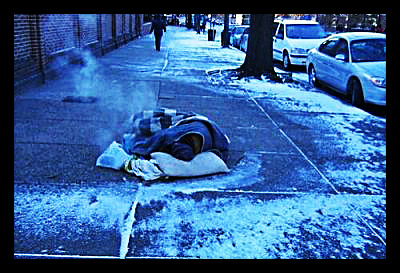 If you live in the United States or have been paying any attention to global news over the past week, you have probably heard a lot of discussion and speculation about the icy weather phenomenon that meteorologists are calling the “polar vortex.”

According to Mark Fischetti of Scientific American, the polar vortex is a wind pattern that circles around the Arctic, essentially keeping cooler air flowing North rather than South. The icy temperatures that are being felt all over the United States are a result of this polar vortex shifting South and taking icy gusts along with it.

Meteorologists all over the country called the icy conditions “life-threatening” and warned Americans to stay inside and stay bundled. Unfortunately, several cities experienced widespread electricity outages and frozen pipelines, causing schools to close and many people to temporarily evacuate their homes.

It is often during times like these when it is important for us to think to ourselves: what about those who live like this every single day?

Icy temperatures aside, a similar panoptic pull and tug of the polar vortex can be compared to the sweeping destruction of extreme poverty. Extreme poverty is not isolated within one particular arena of life rather it affects each and every facet of daily life for almost 1.2 billion people.

Although many citizens of developed countries are aware that extreme poverty exists, it often takes a drastic event like the polar vortex to happen in our own lives before we stop and consider how it must be like to never have basic daily needs met.

The dictionary defines “vortex” in several ways. One of these definitions states “something regarded as drawing into its powerful current everything that surrounds it.”

While America quickly learned that the polar vortex did indeed draw everything into its powerful current, the “poverty vortex” in the developing world functions in a similar manner.

Electricity is a great example of this. While 589 million people in sub-Saharan Africa do not have electricity, this does not mean that it only affects the energy sector within a given country. Rather, a lack of reliable access to electricity affects health care standards and educational accessibility. The cyclical nature of extreme poverty is its own poverty vortex.

However, just as icy temperatures began to subside after a few days and most of America started functioning normally again, the same relief is possible for those in the developing world by breaking the poverty vortex.

By drawing upon our own struggles as a chance to learn more about how people in the developing world live on a daily basis, we can begin to understand how and why the cycle of poverty must be broken. Pick up your phone today and call your members of Congress: tell them that the poverty vortex exists and must be broken.