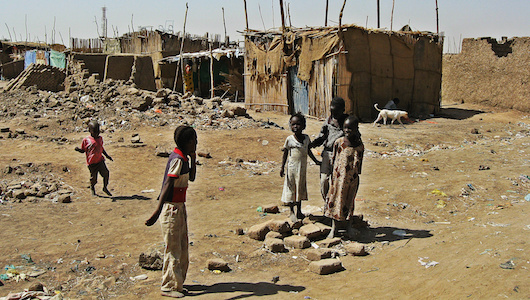 Poverty in Sudan is both a cause and a symptom of the country’s myriad of woes. In this northeast African nation, poverty has opened ethnic fissures and fomented decades of civil strife. At the same time, poverty continues to plague Sudan due to its legacy of conflict and unresolved inequalities between ethnic communities. Although Sudan has boasted modest economic growth in recent decades, poverty in Sudan has increased overall, demonstrating the government’s inability to share the national wealth.

Inequalities lie at the heart of poverty in Sudan. The key inequality afflicting Sudan is the distribution of fertile agricultural land. Along the Nile River in the country’s north, farmland is irrigated and thus produces reliable harvests. Farmland at the country’s periphery, on the other hand, is watered by rainfall, making harvests more vulnerable to climatic aberrations. This inequality has allowed the Nile Valley to develop economically while the rest of the country remains mired in poverty. To this day, a Sudanese state’s level of poverty is strongly correlated with its proximity to the Nile.

Add to this inequality the perilous distribution of ethnic groups in Sudan. Sudanese Arabs, who comprise roughly half of the population, dominate the fertile Nile Valley, while minority ethnic groups–of which there are hundreds–tend to inhabit harsher peripheral regions. Sudanese Arabs have used their geographic advantage to gain a privileged economic and political position over their minority counterparts. As a result, the Arab-dominated Sudanese state has consistently neglected the country’s periphery, exacerbating the poverty that its inhabitants already suffered. Even when oil was discovered in the marginal regions of Darfur and southern Sudan (now the independent Republic of South Sudan), the central government bypassed regional populations and sent the revenues straight to its coffers.

By neglecting its periphery, the Sudanese state has inflicted a security nightmare upon itself. Disgruntled by their government’s apathetic stance toward their regions, peripheral groups launched insurgencies against the state shortly after independence. The central government has taken a hard line on these insurgents, resorting to genocidal tactics at times to reassert its dominance. Moreover, this precarious domestic environment justifies government spending on the security state instead of poverty reduction. All in all, instability prevents Sudan from making lasting strides against poverty.

Economic and social indicators signal an uphill battle against poverty in Sudan in the years ahead. World Bank statistics show that gross primary school enrollment in Sudan has remained stagnant for almost a decade. Without rising levels of education, poverty reduction in Sudan will prove next to impossible. The World Bank also highlights Sudan’s dangerously large current account deficit and projects comparable deficits in coming years. Were Sudan to suffer a macroeconomic crisis due to these imbalances, the poor would suffer most acutely. Finally, the IMF notes Sudan’s bloated public sector, whose share of Sudanese GDP grew from six percent in 2000 to 40 percent in 2010. In addition to exacerbating macroeconomic imbalances, this reckless spending hinders the private sector’s ability to flourish and reduce poverty.

Sudan offers a textbook case of how not to reduce poverty. Though poverty in Sudan may be less severe than in neighboring countries, the Sudanese state has failed to address the inequalities that drive the country’s poverty. In doing so, the central government has fomented a cycle of civil conflict that deepens the misery of those in its wake.