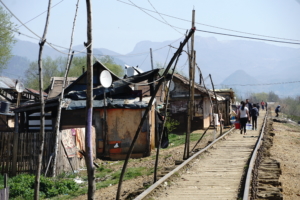 Bordering the Black Sea and just between Bulgaria and Ukraine sits Romania. Although the nation had one of the highest growth rates in the European Union (EU) last year of 3.7 percent, poverty in Romania still remains an issue.

More than 1 million children live in poverty, and over 350,000 live in severe poverty. Poverty in Romania has also contributed to the highest mortality rate in children in the EU.

Currently, UNICEF is working in Romania to ensure children receive the best possible start to life. The organization’s program is designed to combat poverty in Romania by ensuring babies and new mothers receive proper care.

UNICEF is also dedicated to ensuring parents receive proper education in parenting from basics like breastfeeding to providing access to the best quality of education.

However, poverty in Romania is not isolated to the youngest members of society. According to Adrian Oras, Coordinator for the Europe-wide campaign group, Opening Doors, “poverty has worsened due to a high rate of unemployment, a wide gap between rural and urban areas in terms of investment, education and employment opportunities, and a general descending economic trend after the 2008 financial crisis” — all of which have only worsened, since the nation joined the EU in 2007.

Fighting poverty and social inclusion are priorities under the 2020 targets set forth by the EU. In light of these goals, Romania passed an anti-poverty package of 47 measures to combat poverty by focusing on increasing the employment rate, reducing early school leaving rates and scaling-up national health programs.

One of the most important anti-poverty legislative measures, the Romanian Venitul Minim de Incluziune, is currently tabled for debate in the Romanian Parliament, which would serve as a consolidation of three existing means-tested programs. Once this law is approved, it will aim to consolidate the three existing social assistance programs: Heating Benefit, Family Benefit and Guaranteed Minimum Income (GMI).

According to a recent series of poverty resolution maps developed by the World Bank, much of the northeast portion of Romania is at risk for poverty, while the southern tier is very much a sporadic mix of “at-risk” areas. These variations make it difficult to create a “one size fits all” approach to eradicating poverty in Romania and necessitates local strategies.