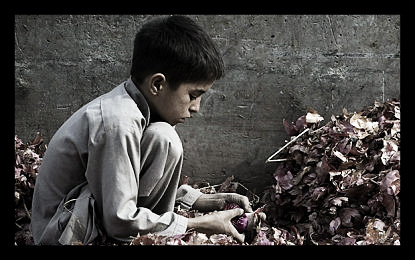 Political and religious extremism is the backbone of the violent terrorist action throughout the world. A devout follower of a religious sect finds justification in their violent actions based on the misunderstood teachings of their religion, be it Christianity or Islam.

American Christian fundamentalists detonate explosions in abortion clinics, claiming they are saving the lives of unborn children. Islamic extremists use suicide bombers to attack soldiers, believing they are doing their duty for Allah.

A conceptual argument based on a person’s own beliefs to fight against something they find unjust. But what necessarily creates a mind-state where a human being develops extremist beliefs? Upbringing? Social norms? Poverty? An argument can made for a variety of reasons.

Poverty is rampant throughout the known world, with billions of people living in unsafe and sickening conditions. The lack of adequate healthcare and schooling create a cycle where people are unable to remain healthy or lift themselves out of such horrid conditions.

Does Poverty Cause Extremism?

To truly identify if poverty causes extremism, one must look at the bare minimum facts of religiosity.  A 2012 Gallup poll called the 2012 WIN-Gallup International Religiosity and Atheism Index  found that out of all countries on earth, the most religious 10 nations had 85 percent of their citizens respond as “a religious person.” These 10 nations were also increasingly impoverished with the average “per capita income” around $14,100.

While correlation does not necessarily equate with causation in explaining extremism, it gives credence to the ideal that religious attitudes develop greater in harsh conditions. The same Gallup poll also argued that religious virtues are declining in the first world, particularly in Europe and the United States.

In 2012, the Fata Research Centre (CRC) published a report called “Extremism and Radicalization: An Overview of the Social, Political, Cultural and Economic Landscape of (Federally Administered Tribal Areas)” detailing the factors behind poverty that result in radicalization of youths.

The report showed a stunning correlation between poverty, lack of educational opportunities, lack of employment and growing up in a violent society that leads to youths to become religiously extremist. 89 percent of those surveyed emphasized the essential “importance of youth role in bringing prosperity to the region.”

Poverty is a main factor, leading to greater social problems that drive many into extremism. But other reports have argued against this idea. Statistics have shown that most terrorists come from wealthier backgrounds. Palestinian suicide bombers were typically middle-class and received higher education.  A recent report out of Pakistan has argued poverty and extremism do not affect one another.

Pakistan instituted a billion dollar policy which has pushed to aid less fortunate Pakistani residents in keeping them from aligning with terrorist groups. The Social Science Research Network argued that spending money would not truly affect the issue.

Georgetown University’s Christine Fair, an expert on South Asia, argued in a report that there is “no evidence” that impoverished Pakistanis were at risk at becoming radicalized and joining extremist groups. The study also showed that more “affluent, educated” Pakistanis were more like to be radicalized. 6,000 people suggested that poorer Pakistanis were actually less likely to support extremist groups than more affluent, better educated people. The answers are not always so clear when trying to find why a person decides to violently fight for their beliefs.