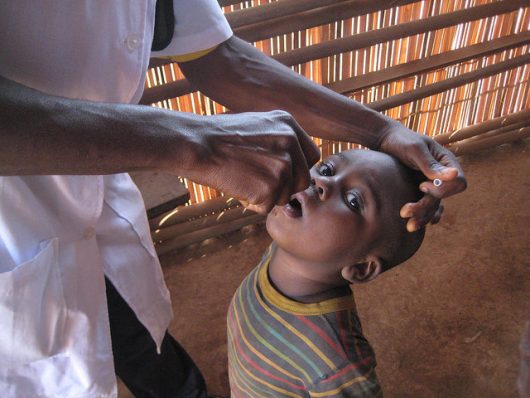 Around 30 years ago, 350,000 people annually were disabled by polio. Since then, the disease has been reduced globally by 99.9 percent. Only eight new cases were reported this year. Afghanistan, Nigeria and Pakistan are the three remaining countries where polio exists. Nonetheless, governments and non-profits continue to work toward polio eradication, with some experts believing the disease could be eradicated as soon as 2020.

In June 2017, at Rotary International’s annual convention, the Bill & Melinda Gates Foundation and Rotary International jointly announced their pledge of $450 million toward polio eradication. At the same time, world governments and other donors pledged a total of $1.2 billion to the Global Polio Eradication Initiative (GPEI).

The good news continued in August of this year when the United Kingdom announced that they would be pledging £100 million to the fight against polio. This funding will provide immunizations to 45 million children per year until 2020.

Though prior to this summer there was a funding gap of $1.5 billion for polio eradication, that shortfall has now been reduced to $170 million due to the contributions of Rotary International, the Bill & Melinda Gates Foundation and the United Kingdom as well as others.

While the focus now is on the three countries where polio still exists, the GPEI and its partner organizations still monitor polio in other at-risk countries.

Although the United Nations declared Somalia polio free, President Farmaajo stated that vaccination campaigns remain crucial. He noted that Somalia is still vulnerable and that polio eradication in Somalia “…was [a] collective effort and commitment by many young men and women who sacrificed their lives.”

The infrastructure built to combat polio in Somalia continues to be used to respond to other outbreaks including measles and cholera. Polio also tends to infect regions marred in conflict. In 2013, there were polio outbreaks in Central Africa, the Horn of Africa and the Middle East. The GPEI managed to end the outbreaks less than a year later.

Nigeria, one of the three countries on the endemic list, was taken off the list at one point after two years with no reported cases. Soon after, four children were paralyzed by polio in northern Nigeria. In response, the GPEI strengthened its polio surveillance operations.

It takes three years with no reported cases of a disease for it to be declared eradicated. Smallpox is the only eradicated disease in history. The United Kingdom International Development Secretary, Priti Patel, stated that, “The world is closer than it has ever been to eradicating polio, but as long as just one case exists in the world, children everywhere are still at risk.”

Due to the contributions of multiple governmental and non-governmental organizations, polio eradication is an achievable goal for the international community.