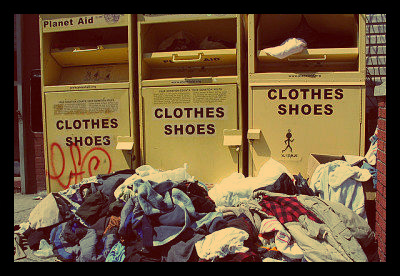 What is yellow and found in most American cities? Planet Aid bins. Founded in Boston in 1977, Planet Aid was at first a small operation. Donations became so plentiful that the nonprofit had to upgrade its office space and nondescript drop boxes.

Planet Aid’s mission is to inspire people to “bring about worldwide and environmental progress.” The organization is part of the Humana People to People Federation, a source of resources for 32 aid groups working across the globe. Every year, about 12 million people are benefited by Federation projects.

Discarded clothing is reduced to two functions: sitting in a landfill and creating carbon emissions. About nine percent of American methane emissions are produced by landfills. Over eight percent of landfills are rubber, leather and textiles. Recycling clothes is a step toward reducing the nation’s carbon footprint, but it is also expensive.

Local governments are hesitant to cover the cost, and so Planet Aid steps in. Their bright yellow boxes are beacons of light for environmentally conscious old-jean-holding citizens everywhere. Once collected, some of the clothing is shipped off to domestic thrift stores.

Most, though, are taken to overseas buyers. Why sell overseas? The market is huge. Quality shirts, pants and shoes can be sold to someone in need for a couple dollars.

If people need them so badly, why sell? Because charity can wreak havoc on local economies. It’s better to stock a merchant’s shelves with affordable goods than to put him or her out of business.

Planet Aid revenues are invested in development projects that meet the goals of their mission: “strengthening communities,” “reducing poverty,” “increasing health awareness” and “promoting small enterprise,” among others.

The organization runs projects in 15 countries. So far, Planet Aid has taught 9,500 teachers in India and Africa. From 2010 to 2011 alone, it provided over 5.5 million dollars in micro-finance to Indian women. It raised HIV/AIDS awareness, established a club that teaches sustainable farming practices and founded several vocational schools.

Everything is funded by profits made from clothing and monetary donations. Through its work, Project Aid has shown that humanitarian aid and environmental sustainability are not conflicting interests.