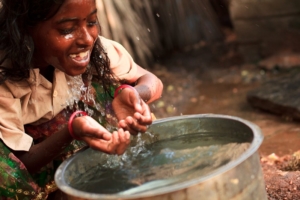 Billions of people around the globe lack consistent access to a safe water supply. Currently, over 40% of the world population struggles with water scarcity, and experts predict the situation will only worsen due to population growth and climate issues.  Water scarcity not only impacts a community’s sanitation and health, but also its economy and the education of its people.  Recognizing the gravity of this global issue, organizations like the PepsiCo Foundation have committed themselves to improving the situation.

The PepsiCo Foundation was created in 1962 as the philanthropic branch of PepsiCo. The foundation partners with various nonprofits to invest “in the essential elements of a sustainable food system” in vulnerable regions.  One of the company’s biggest priorities has been addressing water scarcity.  In 2006, the PepsiCo Foundation announced its mission to provide clean water access to 25 million people by 2025.  Already exceeding this goal, the organization is now hoping to extend its efforts to aid 100 million people by 2030.

One of the main ways the PepsiCo Foundation improves global access to water is through financial aid to organizations that do the groundwork in the areas most affected by water scarcity.  Since 2008, the PepsiCo Foundation has given roughly $34 million in grant aid to clean water access programs around the world.  Grant recipients include Water.org, the Safe Water Network, and the Inter-American Development Bank’s AquaFund. PepsiCo’s most notable partnership has been with WaterAid, an international nonprofit that has worked to bring clean water to 25.8 million people since 1981. In 2018, PepsiCo gave $4.2 million to WaterAid.

WaterAid welcomed the partnership saying, “[s]trong public-private partnerships drive scalable and lasting impact, and we are proud to work with PepsiCo to bring clean water to hundreds of thousands of people in need.”

With this grant, WaterAid predicted the PepsiCo Foundation would help to bring clean water access to more than 200,000. Since then, PepsiCo has continued its partnership with WaterAid as the organization pursues projects in Southern India.

India is one of 16 countries that are considered to have extremely high water risk.  Of these countries, India has the highest population. The PepsiCo Foundation and WaterAid have concentrated the clean water initiatives in India to the rural villages that are plagued by water shortages, hoping to make the greatest impact possible.  In 2019 the organizations worked in three towns—Palakkad, Nelamangala and Sri City—to improve water storage and access.

Since 2016, Palakkad has experienced extreme water shortages, impacting the economy and health of the region.  By August 2019, PepsiCo and WaterAid successfully brought clean water access to the village by building a clean water storage tank.  The partnership also brought 24-hour water access to many families by installing water tap systems into 32 homes.  Similarly, the organizations were able to build 21 tap stands in Sri City.

The PepsiCo Foundation and WaterAid were able to make a tremendous impact in Nelamangala, India, by bringing water to households and schools.  In addition to installing water storing tanks and tap systems, PepsiCo and WaterAid built rainwater collection systems on several rooftops in the village.  This project brought clean water to 49 families in the Nelamangala. PepsiCo and WaterAid also made clean water supply systems in 18 schools, bringing easy water access to over 5,000 students in the region.

Through the company’s many projects and grants, PepsiCo has made it clear that the company regards clean water access as one of the most urgent issues the world faces today.  The organization’s renewed goal is to provide 100 million people with clean water supply by 2030. With this goal, it looks like the PepsiCo Foundation will remain committed to improving water access around the world for years to come.