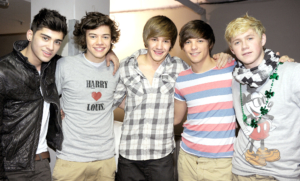 Celebrities are constantly in the public eye and every move they make, from where they ate breakfast to who they might be dating, is highlighted in the media. So, when celebrities use their voices to make a positive difference in the world, it does not go unnoticed and it has the power to bring on major change.

Earlier this summer, One Direction launched their action/1D campaign, as part of action/2015, a powerful movement that believes 2015 is the year of creating concrete plans to eradicate extreme poverty, promote justice and equality and fight climate change.

Action/1D encouraged the millions of One Direction fans around the world to submit videos of themselves describing the type of world they would like to live in, in alignment with these plans.

Two months and 80,000 submissions later, action/1D released “Dear World Leaders,” a unique and compelling film composed of young people from 172 countries explaining what they like about the world, but what needs to change.

Calling on international leaders to end extreme poverty, promote universal education, provide clean, safe water for all people and end world hunger, “Dear World Leaders” features today’s youth touching upon many of the Global Goals, a set of 17 initiatives that align with the action/2015 movement.

Action/1D and “Dear World Leaders” provided young people around the world with the opportunity to contribute to important global conversations and movements. The youth of today are the future of tomorrow, so it is inspiring to see how much they care about current events and improving the world.

Now, One Direction is promoting “Dear World Leaders” through social media and on their “On the Road Again” tour, while also encouraging the public to share the film and the hashtag #action1D on social media platforms. Already, #action1D has reached 2.5 billion hits and trended on Twitter for 11 hours after the initial launch of the project.

One Direction unites their harmonic voices to make an important change in the world and impose a lasting difference that will ultimately improve the quality of life for many people. In the public eye, they have the power to raise awareness and gain support in the fight against extreme global poverty.