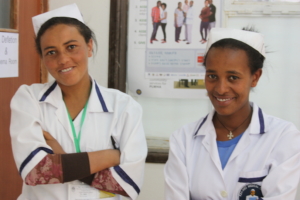 Less than two billion of the world’s population have access to safe, emergency surgery. Lack of surgical interventions accounts for 32% of deaths worldwide, according to a report published by the Lancet. In rural areas, patients travel long distances and sell belongings to receive the emergency care they need. It is often too late to help them by the time they meet with a specialist. For the first time, nurses were trained to provide life-saving surgery in Ethiopia.

In countries like Ethiopia, lack of access is primarily due to physician shortage. After training for 10 years, many specialists leave the country for better conditions and pay. The current specialist ratio in Ethiopia is less than 1:100,000. This makes it impossible for the majority of the population to gain access to surgery in Ethiopia.

The Ethiopian government began implementing a novel solution to the problem in 2009. Nurses, midwives and other healthcare workers were trained to provide emergency surgery such as cesarean section, appendectomy and laparotomy. Moreover, in the last decade, thousands of healthcare professionals have graduated from the three years training program. This provided people in rural settings access to surgery in Ethiopia. The majority of surgeries done were cesarean sections, which helped reduce the maternal mortality rate by half in 2015. Nurses or trained surgical officers achieve outcomes comparable to that of surgeons. Some medical professionals believe this is due to the experience of these individuals working on the front lines. They can identify emergencies skillfully and provide effective solutions.

Other Countries Are Doing the Same

Nurses comprise 50% of the global healthcare workforce. Many organizations such as the International Council of Nurses argue that nurses don’t currently work at their full potential. Nursing Now, another organization, believes that by utilizing nurses more, we could reach global health goals faster. Despite successes, skeptics are still concerned that nurses will not be able to deliver healthcare as effectively as traditionally trained physicians. However, other African countries including Mozambique and Tanzania have also started similar programs. Additionally, these programs observed that training midlevel providers to do surgery was a cost-effective method to provide long term care in rural areas. Around 90% of the providers stayed in rural locations after seven years compared with 0% of physicians.

Despite the success of nurses in increasing access to surgery in Ethiopia, they are still faced with many challenges. Routine power cuts interrupt surgeries around the country with dangerous consequences. In addition, the shortage of resources such as antibiotics and anesthesia hinders the work of these health care workers. Poor equipment and long waiting times contribute the most to high mortality rates for surgery in Ethiopia and other developing countries. Although emergency surgical workers have expanded the workforce, they do not solve the problem of low resources.

To continue increasing access to surgery in Ethiopia, the country was part of Safe Surgery 2020 in 2015. Safe Surgery 2020 is an initiative that partners with other NGOs to provide life-saving surgery to more of the world’s population in a safe and affordable way. The initiative has taken lessons from training healthcare providers and applied them to Cambodia and Tanzania as well. In addition to training more workers, Safe Surgery 2020 addresses gaps in infrastructure, policy development and research.

Future development programs can support the positive work being done by improving infrastructure and the delivery of resources to rural areas. By training more local experts, more of the world population can have access to basic surgery and healthcare.