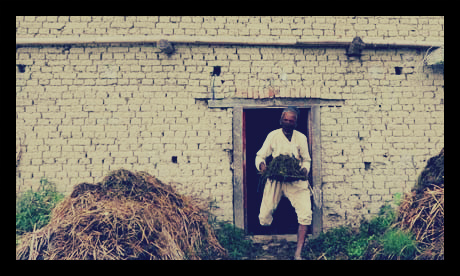 Instead of using the traditional nitrogen-rich fertilizer typically used to encourage crop growth, researchers in Nepal are experimenting with an unlikely candidate for fertilizer: human urine.

Urea, which is typically used as fertilizer, was found by researchers in Nepal’s capital to be inferior to human urine in fertilizing crops. As part of their research, compost was mixed with different types of fertilizer sources, including urine mixed with compost, and the combinations were tested on pepper plants. The plants in which a mix of urine and compost was used grew the tallest plants that bore the most peppers.

Scientia Horticulturae, who released the study, attributed the positive affect of the unique mixture to “reduced nitrogen loss and enhanced availability of organic carbon in the soil.” The researchers conclude that human urine could be a possible alternative to traditional fertilizers in enhancing sustainable agriculture.

The study goes on to point out that although the use of urine may enhance crop growth, the use of it alone is not sufficient to have a positive effect on plants – it must be used in addition to compost. Currently in Nepal, farmers are applying urine directly to soil, which is not efficient.

Urine alone does not contain organic matter to become a viable source of nutrients for crops, but does provide “faster-releasing nutrients that complement slow-release nutrients from compost, which has a higher content of organic matter and beneficial microbes.”

Researchers acknowledge that although the combination of urine and  compost is sustainable, efficient, and cost-effective, marketing this to farmers may be difficult due to “cultural factors” and reluctance of farmers to handle human urine. Experts also cite that government subsidies to mineral fertilizers will stand in the way of widespread use of urine in agriculture.