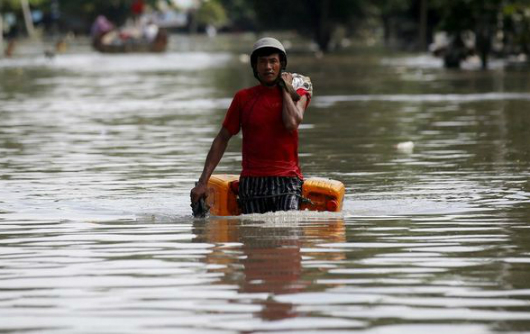 Flooding and extremely heavy rains have accounted for about 150,000 displaced people in Myanmar and the death of 27 people thus far. These extreme conditions were initially attributed to Cyclone Komen, which hit the region of southeast Asia, followed by intense rain.

These rains have lead to flooding, landslides and other disasters, which have completely destroyed specific regions in Myanmar. Heavy rains that have plagued the region in past weeks are unfortunately expected to continue over the next few weeks, furthering the disaster and mess that fills the region. There are images and videos of people using rafts and boats to maneuver through city streets, where cars were meant to be driven.

This is an issue of security for the government of Myanmar as well as private actors that are trying to assist displaced people in the region. Though the disaster occurred a few days ago, both government officials and members of other organizations such as the Red Cross predict that they will not able to reach any people caught in the disaster for days. Because the flooding and landslides are so intense and extreme, it is difficult for anyone on the outside to make their way into the disaster efficiently or safely. This also means it is near impossible for those stuck in the floods to make their way out to safety.

The extent of damage varies throughout the region. Not only have homes been washed away and roads completely submerged in water, but even bridges have been washed away and large buildings have collapsed. The United Nations has said there are about 140,000 people left from the flood and disaster currently living in camps in the region’s capital after managing to escape the horrible conditions.

These floods will have a detrimental long-term impact as well. Numerous crop fields, including about half a million rice paddy fields, have been flooded and destroyed. The economic toll of such destruction has yet to be determined.

There is hope that the extreme weather conditions will ease soon, thus making relief aid more readily available and able to enter the region to help those who are trapped.