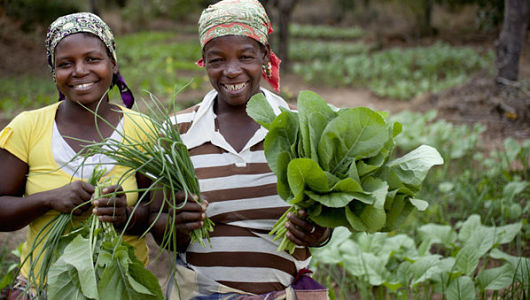 Genetically modified organisms, or GMOs, are often touted as the solution to Africa’s food crisis. However, some argue that the solution has been there all along, in the form of native plants.

A 2010 study recently highlighted in Nature found that, in most cases, indigenous plants contained much higher concentrations of key nutrients, such as vitamins A and C, than non-native varieties. In the case of the native Moringa tree, its leaves pack three times more vitamin A than carrots and seven times more vitamin C than oranges.

While some modified non-native crops do contain much higher percentages of certain nutrients, such as the well-known “Golden Rice” which was created to combat vitamin A deficiency, the harsh climate in much of Africa makes growing non-native crops much more challenging. In addition to having considerable nutritional content, indigenous crops are hardier and faster growing than their exotic counterparts.

With predictions of global climate change causing weather patterns to become more erratic, with sudden rains and long periods of drought, native plants that have spent thousands of years adapting to Africa’s already intense climate could offer a much more reliable food source in the face of such dramatic changes. “Most of the traditional varieties are ready for harvest much faster than non-native crops, so they could be promising options if the rainy seasons become more erratic—one of the predicted outcomes of global warming,” wrote Cernansky, author of the Nature article.

Despite their advantages, native crops make up only a tiny fraction of total agricultural sales. In Kenya, native plants only account for roughly 6 percent of the market, despite the country seeing a 25 percent increase in the land area dedicated to native plants from 2011 to 2013. Much of the lag is due to poor or unreliable infrastructure restricting access to market opportunities. According to Lusike Wasilwa, assistant director of horticulture at Kenya Agriculture and Livestock Research Organisation, more research is needed to address the issues of production, storage and marketing of native plants.

While it is clear that native plants will not be able to solve Africa’s food crisis overnight, they may offer a cheap and elegant solution in the future.