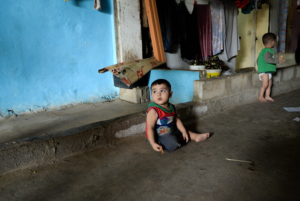 The NPTP in Lebanon works alongside various other outside humanitarian organizations, including the World Food Programme (WFP), the World Bank and the UNHCR. The WFP, specifically, has been working alongside the NPTP since 2014,  supplying food-restricted money transfers, “redeemable in WFP contracted shops.”

The money transfers are valued at $20 per person per month along with a supplement of $25 per household per month. This benefit has been especially useful for the country’s most vulnerable populations who are struggling amid rising food prices and other economic challenges. Specifically, the Lebanese pound has dropped in value by nearly 95% since 2019 resulting in a severe increase in the cost of living. Additionally, the gross national income of Lebanon has decreased by over 50% in the last four years.

As purchasing power falls and the cost of living rises, the number of affected households does too. By the end of 2021, over 50% of the population required assistance to access basic needs. By the second half of 2021, food insecurity in Lebanon reached nearly 50% and severe food insecurity doubled, according to WFP Lebanon.

Some Statistics Regarding the Affected Population

According to the UNHCR, of the estimated 1.5 million Syrian refugees living in Lebanon and 90% of them live in extreme poverty.

Successes of the NPTP to Date

According to statistics published by the NPTP in Lebanon, the program directly benefited roughly 430,000 households in 2022, including 11,000 people above the age of 64 and 22,500 children 5 years and younger, according to the Presidency of the Council of Ministers.

Along with assistance provided by the WFP, as of October 2022, the NPTP in Lebanon has reached 64,000 households with monetary transfers and expects to reach as many as 75,000 by the end of the year. This is a significant increase in distribution since the inception of this collaboration, compared to 2014 when only 5,000 households received assistance from the NPTP.

The UNHCR has also aided the NPTP in Lebanon by providing shelter rehabilitation support to the most severely affected people.

How the NPTP Continues to Improve

Importantly, the National Poverty Targeting Programme in Lebanon has not only increased the scale of its assistance since 2014, but it has also worked to ensure that the method of assistance remains the most effective for those in need. For example, because of the current economic crisis, the MoSA has modified the traditional method of food assistance from the distribution of food baskets to food-restricted cash, as providing higher-value cash allows beneficiaries to purchase more food over a longer period of time, WFP Lebanon reports.