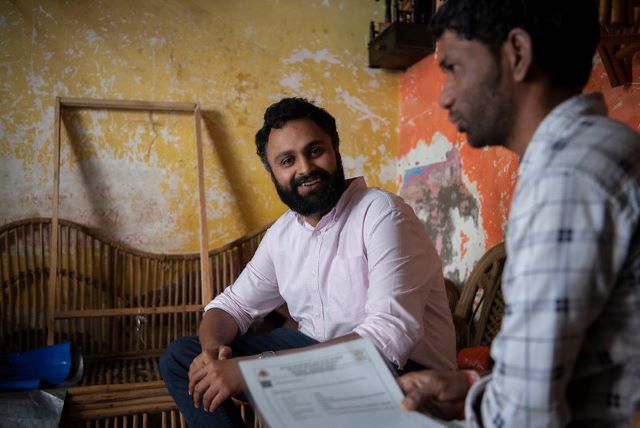 In 2001, Jacqueline Novogratz founded Acumen, a nonprofit impact investment fund that supports sustainable solutions to problems of poverty. Acumen ensures to invest in moral leaders and argues that these are the people who will help influence efforts for poverty reduction around the world.

What makes a moral leader? According to Acumen’s founder, there are five central features: commitment, moral imagination, persistence, courage and faith in improvement. Commitment, persistence, courage and faith are familiar virtues that can be applied to purposeful contributions toward global poverty reduction. Moral imagination is a way of thinking that fosters targeted and more effective innovation. It involves having the humility to see the world as it is and the audacity to imagine the world as it can be. All of the above qualities are important to developing effective solutions to problems of poverty and are exhibited by moral leaders.

Aniket Doegar, an Acumen fellow, is an example of a moral leader that Acumen has invested in. He possesses all five traits of a moral leader and his life’s work has shown this. An issue of particular interest to Doegar was the fact that only 40 million of 125 million farmers in India received full benefits from a national government initiative. One reason for this is that many qualifying citizens do not know about the benefits available to them. Doegar realized this and co-founded Haqdarshak, a mobile platform that connects citizens with the welfare benefits they qualify for.

Doegar took bold steps to solve a problem of poverty on a national level that he believed could be solved. He made a commitment to problem-solving at a young age, influenced by moral leaders in his life. His mother taught at schools for low-income families and his aunt taught children with special needs. Doegar’s dedication, persistence and faith surrounding social change turned into results for those in poverty through morally imaginative and courageous efforts.

Haqdarshak has screened 300,000 applicants and connected 250,000 to government welfare benefits. Acumen invested in Haqdarshak in September 2020, noting the fundamental values of the enterprise. Haqdarshak has grown from processing 500 applications a month to 36,000 applications a month. Amid the increased need for welfare benefits and Acumen investment, Doegar has set the goal to reach 100 million connected citizens by 2030.

In 2020, Acumen launched Acumen Academy. Acumen Academy encourages moral leadership globally in a variety of ways. It is available to individuals and organizations as an online library of courses and other resources on leadership, innovation and social change toward global inclusion. Acumen Fellows started in 2006, form a cohort of moral leaders who have completed a year-long program at Acumen Academy that promotes empathy, immersion, understanding and action. Fellows commit to social change and together are more accountable, informed and innovative. Doegar is just one example of many Acumen fellows who have sparked change.

Investments and support for moral leaders around the world are important for the continued reduction of global poverty. Acumen’s manifesto encourages everyone to embrace the qualities of effective, empathetic leaders. Embracing moral leadership and the perspective that all citizens of the world are born equal, helps further necessary global inclusion amid a time of rapid development and increasing need.